Fighting for the Right Things 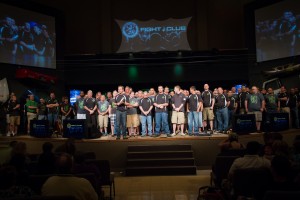 From the beginning of Jim Brown’s ministry as senior pastor at Grace Community Church, Grace Brethren congregation in Goshen, Ind., he noticed “the flight of men from the local church.” Brown saw women and families coming to Grace alone. Even for those men in attendance, he remembered, the men’s church ministries simply weren’t “capturing their hearts, weren’t making them come alive.

“If you were to cut me open, quite frankly,” Brown said, “you’d see that my heart is wired in such a way that I want to go after men to be alive for Jesus. And believing that the local church is the hope of the world, I thought, what better place is there for men’s transformation than that?” The hope of developing a more effective men’s ministry stayed with Brown as his time at Grace Community lengthened.

After training for and completing a Tough Mudder with his pastoral team, Brown realized that something had changed between them as a result of the race. The shared experience fostered camaraderie and brotherhood. Recognizing the potential for a men’s ministry, Brown began to brainstorm a new kind of discipleship program. Thus, Fight Club was born.

“Developed by men, for men, to reach men,” Fight Club launched in 2012 as a way to re-ignite the courage and strength of Christian men. Fight Club aims to “awaken Christian men from mediocrity, strengthen them relationally, intellectually, physically and spiritually, and resurrect true masculine community and mobilize them for maximum impact in their families, churches and communities.” Based on the idea of “fighting for the right things” in Nehemiah 4:14, Fight Club puts each participant through a stringent series of physical, intellectual, and spiritual challenges each week. Men work through these challenges in small groups called squadrons, holding each other accountable to the weekly goals and the overarching creed.

On that first night of the first Fight Club chapter at Grace in 2012, the leaders expected 75 to 100 men at the midnight celebration. As the start-time approached, however, they watched as 400 men filled up the room.

“I remember being very vulnerable, standing up front and looking out across all those guys, praying, ‘Lord, help me not to blow this,’” Brown said. “It was so much more than we ever expected, and we were so much more over our heads. We were so reliant upon God. And He just blew us away.”

“We put this packet together, and it shipped in a 50-caliber ammo container,” Brown said. “Two years ago, I released it at the Vision 20/20 Conference, and between that and word of mouth, it’s now in 100 churches across America. We’re not just glad so many men are Fight Club men. We’re glad men are chasing after Jesus.”

While Fight Club is about camaraderie and challenge and competition, it also reaches for a higher goal. Brown summarized, saying, “Guys are wired for [camaraderie, challenge, and competition]. Trying to create an opportunity [like this] for men in the local church was just optimal. Fight Club creates this journey where men are doing life together, lifting each other up, and supporting each other.” Most importantly, however, Brown concluded, Fight Club is about “a bunch of dudes who are following after Jesus.” — by Marisa Vogel