Film to Discourage Sex Trafficking to Premiere in Columbus 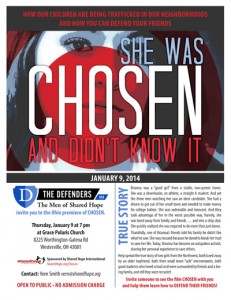 The Ohio premiere of the movie, “Chosen,” will be Thursday, January 9, at Grace Polaris Church, 8225 Worthington-Galena Road, Westerville, Ohio (Mike Yoder, pastor). Hosted by the church and sponsored by Shared Hope International, the film details how two victims were recruited into sex trafficking.

Also speaking at the event are Vern Smith and Nick Lembo, who will have participated at the Ohio Statehouse Human Trafficking Awareness Day event earlier in the day. Vern’s wife, Linda Smith, started Shared Hope International in 1998 after spending four years as a Congresswoman from the state of Washington.

“Chosen” was produced by The Defenders, a group of men seeking to enlist men in the fight against sex trafficking. They encourage men to avoid all forms of commercial sexual exploitation (pornography, prostitution and strip clubs), to hold men around them accountable, and to take steps to protect their families. For more information, see the video below.

The Defenders: We Can End Demand from Defenders USA on Vimeo.