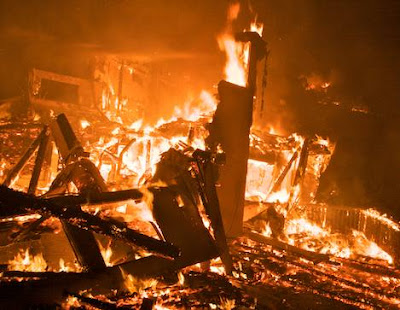 Fire Destroys Westmont College Buildings
No one is injured, but at least eight college buildings were destroyed.

The flames destroyed several buildings that house the physics and psychology departments, a dormitory and at least one faculty home, college spokesman Scott Craig told the Associated Press.

An automated message on the college’s switchboard says, “Westmont College has suffered major damage due to a wild fire, but all students and employees are safe. All major campus buildings are unscathed, but we did lose 8 smaller buildings and 14 faculty homes in the adjacent development.” Classes are canceled today, but the college hopes to resume on Monday.

The fire burned around 1,500 acres and destroyed at least 80 homes in the surrounding neighborhood, according to the Los Angeles Times. The fire is not yet extinguished, but authorities believe they have contained it.

Hundreds of students fled to a gym, where they spent the night sleeping on the floor. Some stood in groups praying, others sobbed openly and comforted each other.

Beth Lazor, 18, said she was in her dorm when the alarm went off. She said she only had time to grab her laptop, phone, a teddy bear and a debit card before fleeing the burning building.

The college’s website and student newspaper website are currently down, but Ray Ford has photos of the fire on his site.

The Chronicle of Higher Education writes that last night, the website listed structures partially or completed destroyed as including “the Physics Building, the old math building, Bauder Hall, and the Quonset huts.”

The college lost electricity after a natural-gas line broke, interrupting the fuel supply for the college’s generators. The Red Cross brought cots and blankets to the gym for people who wanted to remain there, but students and others who wanted to leave the campus were being allowed to depart.