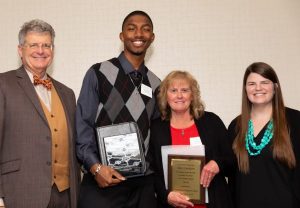 Jalen Williams, a Grace College sophomore from South Bend, was one of 30 Hoosier students honored at the annual “Realizing the Dream” banquet on Nov. 2 in Indianapolis. The event is organized by Independent Colleges of Indiana (ICI), of which Grace College is a part. Each of the honorees is a sophomore student who has “realized the dream” to be the first in his or her family to attend college.

The event is made possible by the support of the Lilly Endowment, Inc. Each honoree received a $3,000 check to help with college costs. Additionally, each student selected a “most influential educator,” who received a $1,000 professional development grant.

One out of every three students on ICI campuses is first-generation. Generous financial aid provided by ICI institutions, combined with state and federal grants, makes a private college education a possibility for all Hoosier students, including Williams.

Williams had a good grasp of what he was looking for in a college early on in the search. “I knew I wanted to go somewhere that I could continue to grow both spiritually and academically. I didn’t want to go to a large school because I learn best in small and intimate settings, and a Christian college seemed like the best way to foster spiritual growth,” he said. After looking closely at another private Christian school in the Midwest, Williams decided to give Grace a visit; “The atmosphere was so warm and welcoming, and I could really sense a love for God all over campus,” stated Williams.

Now in his second year at Grace, Williams has taken an active role in the Grace community. He serves as a member of the Council for Diversity and Inclusion, participates in the intramural basketball league, sings in the Lancer chorus and holds a job on the chapel tech team.

Williams said he was thankful and honored to be selected for the scholarship. He described it as “a reminder that you never know who is watching you and taking note of your effort and hard work.”  According to Williams, the day he received the email notifying him of the award, he was overwhelmed and stressed about school. “I was honestly reaching my limit and needed some form of hope to say, ‘Keep going.’ That’s when I checked my email. At that moment I felt God telling me, ‘Don’t give up when you’ve made it this far,’” recounted Williams.

“Mrs. Congdon really helped put me on the right track when I was little. In fifth grade, I moved to a school that was more advanced than what I was used to. I struggled with keeping up with the other students, and my grades were pretty low. Mrs. Congdon walked me through every assignment that I struggled with and taught me organizational skills and ways to become a better student,” said Williams. “Thanks to her, my grades went up and I became an honors student.” – from grace.edu