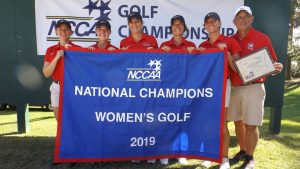 PALM COAST, Fla. – A sweeter script could not have been written. Grace women’s golf. National champions. 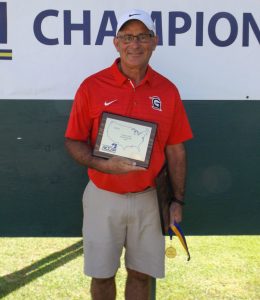 Grace entered Wednesday’s final round tied atop the leaderboard with NCAA Div. II Erskine. But Erskine turned in 5 bogeys, 4 double bogeys and 1 quadruple bogey over the first three holes to give Grace an early edge.

Carolyn Pacocha and Rachel Harvey each parred eight of the first 12 holes to give Grace an early 12-stroke edge.

Erskine charged back over the back nine, however, eventually erasing Grace’s lead and even pulling ahead as the tournament wound down to the final three holes.

Freshman Lucy Young, paired up with the individual champion Anna Parramore from Erskine, produced three clutch holes to give Grace the title.

Young finished the tournament third on the individual leaderboard to earn All-American status. She carded a three-round total of 76-80-82.

Rachel Harvey was steady throughout the tournament with all three of her rounds counting toward the team score (85-82-81). She finished just outside of the top 10 with an 11th-place finish.

Freshman Carolyn Pacocha was fourth overall for the Lady Lancers (80-85-86), and Anna Marshall rounded out Grace’s lineup (88-83-85). All five Lady Lancers finished in the top 16 on the individual leaderboard.

Duncan was honored as the NCCAA National Coach of the Year after leading the Lady Lancers to the championship.