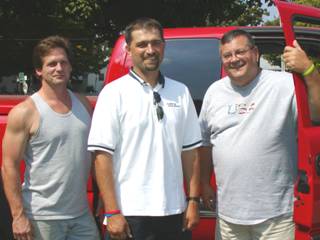 Jim Robinson (left), Clive Craigen (center) and Kurt Miller were some of the members of the Grace Brethren First Response Team who left from various parts of the U.S. this past weekend, heading for Northwest Louisiana, to help Dan O’Deens serve the thousands of people who were in the seven Red Cross shelters in that region.

Clive Craigen, one of GBNAM’s missionaries to Chicago, joined Jim Robinson (from the Community GBC in Warsaw) and Kurt Miller in Winona Lake, IN, where they left together for the 15-hour drive to Shreveport.

Arriving there about 3:30 a.m. Saturday, they had only a few hours until their first meeting for training, before being assigned to shelters where they would serve. Jim Robinson was assigned to the Emmanuel shelter, which had begun as a church shelter and was soon overflowing. Kurt Miller was asked to oversee three shelters, and Clive was assigned to float between all three.

“Logistics have been difficult,” notes Miller. “There are so many hurting people, and the needs are constant, whether it’s finding and delivering milk for children at the shelters or helping the people make contact with the federal agencies that are providing funds for the evacuees.

“Most days we’re constantly at work, from 8 a.m. till 10 p.m. or later. Communication hasn’t been easy. The phone lines have been jammed with calls from evacuees trying to get through to the 800 number they were given to get federal aid. Some of them have been trying for days.”

Shelters vary. The experience at each shelter is very different, depending on the evacuees who are there and who is in charge. Chuck Davis, GBNAM’s Southeast Career Missionary, was assigned to serve at the shelter in the gymnasium of Louisiana State University, Shreveport campus.

“The organization here has been great,” says Davis. “The locals have been doing a wonderful job, and the churches have been great about taking people in and caring for them. Here, lots of people [volunteers] just showed up to serve.

“We had people who would just walk in, asking if anyone needed a home, and then take them home. Most of the evacuees who came here at first got out before the storm hit. Those who came later were mostly those who simply didn’t have the means to get out. Some have homes they’ll return to. Some don’t.”

Numbers stabilizing; situation improving. Miller adds, “The numbers at our shelters are beginning to stabilize as of yesterday, and we’re getting more help. Since one of our shelters is directly across from the police department, we’ve had 24-hour police presence.

“We haven’t had the problems that have been reported other places. There have been no incidents of criminal behavior, and no gang involvement. The kids are in school; buses pick them up daily at the shelters. There’s also daycare available.”

Most evacuees desire to stay in Louisiana. At a housing program held last night in the NW Louisiana region, a congresswoman from Ohio offered housing and guaranteed jobs for anyone at the shelters who wanted to relocate. Only one man accepted the offer.

“In my experience with the people here, most of them don’t want to move north,” says Miller. “Many have homes and jobs they’ll eventually return to, and Louisiana is going to need a large workforce for the rebuilding process. The reaction of the people at our shelters has been that they’re grateful for offers they’ve received, but it can seem too much of a burden to make the transition north.”

Please continue to pray for the evacuees and for our Grace Brethren First Response Team!