Florence Figert, a 36-year employee of the Grace Brethren Investment Foundation (GBIF), has died. Her obituary appears below. 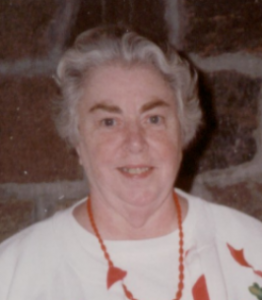 Florence Elizabeth Figert, known to many as “Flo,” passed away quietly on Friday, August 20, 2021, in North Manchester, Ind., at Peabody Retirement Community. She was a longtime resident of Warsaw, Ind.

The daughter of Randolph Theodore and Daisy Esther (Tiffany) Moeller, Flo was born in Johnstown, Pa., on December 25, 1933. She spent her formative years in Johnstown and graduated from Johnstown High School with the class of 1954.

Intelligent and very astute, Flo spent more than thirty-six years with the Grace Brethren Investment Foundation as a bookkeeper, though her role there encompassed many jobs. She was a longtime member of Lakeland Grace Brethren Church and was very active in church life. She enjoyed camping and traveling and was a talented seamstress. She made clothes for her family and friends and even sewed her daughter’s wedding dress – which was featured in local newspapers. She also enjoyed helping her husband with woodworking projects, often finalizing the projects with her painting skills.

United in marriage to Billy D. Figert on April 13, 1958, Flo and Bill spent more than 63 years together before her Friday passing. She was also preceded in passing by brothers, Ted Moeller and Kenneth (Violet) Moeller; sisters, Esther Moeller and Mary Louise Ringler (Earnest) and their parents. In addition to her husband, Billy, those who survive include their daughter, Debra Beam of St. Augustine, Fla.; grandchildren, Myshaun Beam and Cherish (Jeff) Buriff; six great-grandchildren; brother, Rev. Robert (Donna) Moeller of Sterling, Ohio, and a sister-in-law, Bonnie Moeller.

Memorial gifts may be directed to Lakeland Grace Brethren Church, 2538 S County Farm Rd, Warsaw, IN 46580. Written condolences may be left for the family at TitusFuneralHome.com.