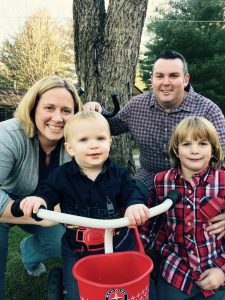 Gordi and Ashley McIlroy and family.

Many people come to the U.S. for a better life, religious freedom, or fleeing persecution. Gordi McIlroy came for love and a calling from God.

Raised in a Christian home in Northern Ireland, Gordi accepted Christ at age 11 during a Christian rock concert.

“As I grew in the Word of God, I learned of a mission organization in Northern Ireland called Exodus, a Christian alternative to the pubs and night clubs. Exodus also does overseas mission teams with a huge emphasis on discipleship.”

Having never been outside the United Kingdom, Gordi wanted to go to Chicago, until he heard that a team going to Uganda was going to put a roof on an orphanage.

“Being the only young qualified carpenter in the building, I began having an internal argument with the Holy Spirit,” he recalls. “I desired Chicago, but God was calling me to Uganda, so reluctantly I agreed to go.” e next year, there was another opportunity to visit the Windy City, but rather than working in a shelter as the team had previously, it was going to help with vacation Bible school at a Baptist church in a suburb.

That visit began a turn of events that found him in full-time ministry in the U.S.

During his time in Illinois, he caught the eye of the pastor, who saw a gifting in the young man. The pastor ultimately offered Gordi an internship at a church in nearby DeKalb, Ill.

“I sought God’s will and followed His calling,” Gordi remembers. “Ever since I have had an overwhelming desire to remain in ministry. I can’t even explain the joyous feeling of leading someone to Christ.”

When the internship was over, he returned to Northern Ireland passionate about reaching the lost and teaching the Word. “God opened a door, and I accepted a calling as the director of Youth and Family Ministries in St. James’s Presbyterian Church in Northern Ireland where I ministered for four years,” he said.

In 2004, he met Ashley, who had come to his country for the summer on a Youth for Christ mission team.

They were married in October 2005 in her home state of Pennsylvania. They had planned to return to Ireland to minister, but on the night of their wedding rehearsal, he received a call from a church in Parkesburg, Pa., with an offer to become their director of Christian education.

Since October 2015, he has served as the Oxford Campus pastor at Gateway Grace Community Church, a Charis Fellowship congregation in Parkesburg, Pa. (Scott Feather, lead pastor).

For Gordi, moving to the U.S. has been easier because of previous connections and his marriage to an American citizen. “At the same time, it is a challenge as I left all my family in Northern Ireland for the long term,” he says. “I miss them and the country a lot, yet I am super grateful for the opportunities God has given me to be ministering here in the U.S.”

With Ashley, he shares a “passion to reach the lost, see them join the church family, and grow together as believers,” he says.

“God has been so good at making a way throughout Ashley’s life and my life to make His will be done,” he says. The couple has two boys: Silas, who is 6, accepted Jesus at Gateway when he was 4, and Tait, who is 18 months.

“We are excited to see how God uses us to continue to grow Gateway Oxford Campus and continue to daily trust God and his perfect plan,” he concludes.

This was first published in the GraceConnect magazine. To read the complete issue online, click here. To receive your personal copy, at no charge, in the mail,  click here.