A story in Saturday’s Elkhart, Ind., Truth, tells the next steps for a former Grace College basketball player. Kyle Johnson has just assumed the reigns of the varsity program at Independence High School in Independence, Ohio. A portion of the story appears below. Click here to read the complete article.

Ex-Jimtown standout ready for next challenge 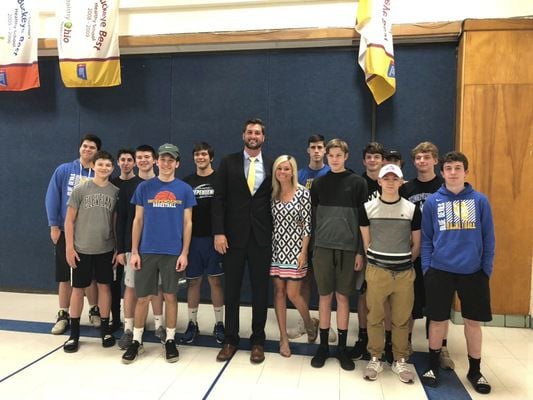 Kyle Johnson and his wife, Jenn (center), with some of the players for the upcoming basketball season at Independence, Ohio, High School.

Kyle Johnson knows what it’s like to be a part of a very successful high school boys basketball team.

He was a significant contributor on Jimtown’s 2003-04 Class 2A state championship squad.

Lessons were learned by Johnson during that special season.

He gained more basketball knowledge after high school as a basketball player at Grace College and during his time as a varsity assistant and freshman boys basketball coach.

The school is 15 miles south of downtown Cleveland. The practice facility for the NBA’s Cleveland Cavaliers is right down the road from the high school.

Johnson gave several reasons why the job attracted him.