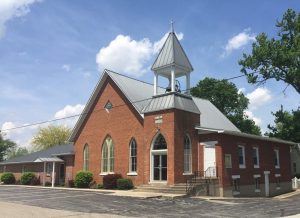 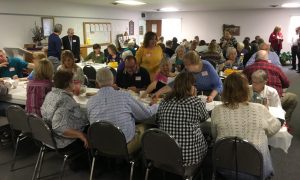 Members and attenders of the former Sidney Grace Brethren Church in southeast Kosciusko County, Ind., gathered in mid-May for an evening of fellowship and celebration in the building that once housed the congregation.

Organized by Brent Sandy, whose father, Rollin Sandy, led the church from 1958-1981, the event on the evening of May 11, 2019 celebrated the ministry of the church, which closed in about 2004. The facilities were sold to another church group, who continues to meet there.

According to Brent, the church began in the early 1900s. His father became pastor in January of 1958 and was pastor until his death in June 1981. “I know that that 23 year stretch was the longest of any pastor of the last 50 years, and probably before that too,” he said.

Though the church remained small, it became a sort of training ground for students from Grace College, many of whom went on to become pastors/pastors’ wives/missionaries in the Charis Fellowship (Fellowship of Grace Brethren Churches). Some of them include: Sam and Betty Baer, Ron and Chery Boehm, Vance and Leeta Christie, Bob and Julie Combs, Kevin and Jill Eady, Earl and Lita Futch, Scott and Cindi Garber, Lynn and Mary Hoyt, Ivan and Kim Hoyt, Aldo and Alice Hoyt, Alan and Ellen Jones, Jerry and Jan Kelley, Dave and Betty Lou Mitchell, Carol Mensinger, Joe and Mary Nass, Eloy and Patsy Pacheco, Alice Peacock, Peter Peer, Mick and Bonnie Rockafellow, David and Chris Rush, Brent and Cheryl Sandy, Ron and Amy Sheranko, Russ and Joann Simpson, Don and Joyce Taylor, Tim and Jan Waggoner, Galen and Elsie Wiley, Mike and Joyce Wingfield, and Paul and Patsy Woodruff.