Word has been received of the death of Jeanette S. Scofield, or “Junie,” as she was known to many in the Charis Fellowship. Following the death of her husband, who was pastor of the Grace Brethren Church in Bowling Green, Ohio, she served as the receptionist for Grace Brethren Home Missions/Grace Brethren North American Missions in Winona Lake, Ind. Her obituary appears below. 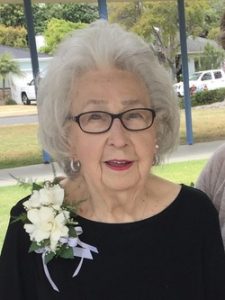 Jeanette S. Scofield, age 96, went to heaven, Thursday, August 1, 2019, quietly taking her last breaths with her daughter, Patsy (Scofield) Lambert by her side.

Whether you called her Junie, Druz, mom, grandma, or great grandma, you knew her smile, jewelry and lipstick. She wore all three until her last earthly days. She loved her family but dogs, birds, and trees were life-long passions. A forever Buckeye, she loved Ohio State, but Peyton Manning captured her Hoosier heart, and her final days were spent cheering for the L.A. Dodgers and USC Trojans (when they weren’t playing OSU). Junie’s first love was Jesus, her Lord and Savior. She saw all of life through the lens of her faith and the promises in God’s Word, giving her constant strength, joy, and hope.

Junie married her high school sweetheart, Edward B. Scofield, and eventually became a pastor’s wife serving in the Bowling Green Grace Brethren Church with Ed. As a widow, she worked at the Brethren Home Missions in Winona Lake, Ind., as their receptionist for many years.

Family and friends are invited to celebrate Junie’s life on Sunday, August 25, at 3:30 at the Lakewood Village Community Church at 4515 Sunfield Ave, Long Beach, Calif., 90808. Junie will be buried next to her husband in the Oak Grove Cemetery in Bowling Green, Ohio, with a graveside service on Friday, August 16, for immediate family.

If desired, contributions in Junie’s honor may be made to New Song Mission (newsongmission.org), a ministry she loved and supported.