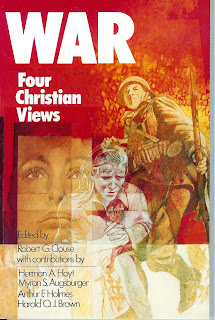 It’s slowly dawning on us that BMH Books has a very important and relevant book which very few people know about.

These days when the Iraq War is such a big topic, many are wondering, “What does the Bible really say about war?”

They are asking important questions like, “Should Christians ever go to war?” “If so, under what conditions?” “If not, why not?”

Biblical Nonresistance is discussed by Dr. Herman A. Hoyt, former president of Grace College and Seminary, Winona Lake, Indiana. In this position, Christians may participate in war only as noncombatants.

Christian Pacifism is the subject for Dr. Myron S. Augsburger, formerly of Eastern Mennonite University. In this view, Christians are to have nothing whatsoever to do with war.

The Just War position is presented by Dr. Arthur F. Holmes, longtime professor at Wheaton College in Illinois. In this view, Christians may fight in a defensive war.

Preventive War position is presented by Harold O.J. Brown, long associated with Trinity Evangelical Divinity School in Illinois. In this perspective, Christians may engage in war to stop attack or to correct outrageous injustice.

Many churches are forming study groups, holding evening classes, or are focusing Adult Bible Fellowship and Sunday School time on the issue of the biblical position on war. Four Views can help.

The book is edited by Dr. Robert G. Clouse, who is a professor at Indiana State University and has for many years pastored the First Brethren Church of Clay City, Indiana.