From 1966: A First-Hand Report of the Ministry of Bill Burk 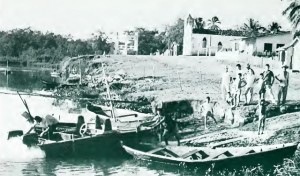 As we learned of last week’s death of veteran missionary, “Amazon Bill” Burk, the tributes to his ministry have poured in. Burk’s association with the Fellowship of Grace Brethren Churches, and Encompass World Partners (formerly Grace Brethren International Missions), with whom he ministered, was long and storied. For many of us who grew up in Grace Brethren churches in the 60s and 70s, we were enthralled with stories of his work along the Amazon River in Brazil.

Many of Burk’s stories are captured in past issues of the Brethren Missionary Herald magazine, which was published from 1939 until the mid-1990s. Nearly every issue included stories from the mission field, so the staff at GraceConnect decided to take a look back and be reminded once again of Bill and Imogene’s ministry in the jungles of Brazil.

Bill began writing for the Brethren Missionary Herald in the early 1950s, while a student at Grace Theological Seminary. His regular column from seminary hill was light and breezy, with news of the comings and goings of faculty members and students. The October 3, 1953, issue reported that Mr. and Mrs. Bill Burk had been appointed by the Foreign Mission Board (as Encompass World Partners was known then) as candidates to Brazil and would be leaving after the close of the seminary year.

A search of the online Brethren Digital Archives brings other results. We found several stories in the April 2, 1966 issue of the Brethren Missionary Herald. Written by Pastor Dean Risser and his wife, Ella Lee, following their visit with the Burks, they provide a glimpse of life on the Amazon. A portion of Dean’s story, written about a visit to Quatipuru, is included below. The original story referenced the village by the nickname of Squirreltown. We have edited the text to include the legal name, Quatipuru.

Eighteen months ago the Bill Burks moved into a small, country village on the Quatipuru River. My wife and I saw and heard the progress made there by the Gospel of Christ, and observed firsthand some of the methods the Lord has blessed.

A decade earlier a Pentecostal group had tried to establish a spiritual beachhead in Quatipuru. They set up a platform with sound system and musical instruments, started a public meeting . . . and were promptly run off by a gang of young rough necks hired by the lay leaders of the Catholic church. The Pentecostal group made a similar effort several times, with the same result every time.

We met Miguel when we were  there recently, one of two keen young  men studying weekly with Bill Burk.  Ten years ago he helped to drive out  the Protestants; now he is a pastor in training, although his father is still a lay leader in the local Catholic church. He is married and has five children, and works long hours in the timber, seeking to memorize 12 Scripture verses every day on the way to and from work. How did this happen?

When the Burks arrived, they bought a house, moved in, and Bill began work on his second boat, “Vamos (Let’s Go!) II.” The Brazilians, always friendly, began to drop by to talk with the American and to have a look at his boat. And since Quatipuru is a market town, people from outlying areas who heard of this wonder stopped by to behold it while they were in town.

The people liked Senhor Bill, and listened politely to his talk of salvation in Jesus Christ. They even bought his New Testaments and accepted his gospel recordings and hand-wound record players, and asked questions. Some returned later to tell them that they had become believers in Jesus Christ.

When the boat was finished and time came to visit other areas along the rivers and bays, Bill already had friends in these places who welcomed him into their homes and introduced him to their friends. All this time there were no announced public meetings, no preaching services, no church building. Personal witnessing and home visitation did the job.

What happened was that the people of the area got to like Senhor Bill before they found out they were supposed to hate him. Without intending to, they had found out that Protestants were not the devils they had been told they were.

Now, those who had received Christ began to witness and to lead others to Christ. Bill met with groups here and there for Bible study. Whenever he said he would be at a certain person’s home for Bible study, that place would be full. Two young men, Neco and Miguel, began to show real discernment and leadership qualities, so Bill began to meet with them to give them special help.

Bill continues to spend his days in calling in homes in various settle’ ments and villages, encouraging and teaching the believers and urging the others to receive Christ and a new birth. On January 1 they decided to hold regular meetings on Sunday and Wednesday evenings at Quatipuru. A local congregation is established.

Quatipuru and our other Brazilian mission points showed us once again that a faithful, believing presentation of the Gospel of Jesus Christ will transform lives. The great need in Brazil is for more missionaries to proclaim the Gospel and train the believers to live for Christ and reach their own people.

Click here to read the complete article as it appeared in the April 2, 1966 edition of the Brethren Missionary Herald, as well as “An American in Brazil,” by Ella Lee Risser.

To look for additional stories about the ministry of the Burks, see the Brethren Missionary Herald at the Brethren Digital Archives. (You’ll also find a link at the top of this page under “History.”) Click on a link to read all the issues from a give year. You have a choice to read it online or as PDF, ePub, Kindle, or a variety of other formats. Click on the one of your choice. Each is searchable. Simply enter the appropriate term in the search box. To search for a particular name or topic, be sure to include quotes around the name, such as “Bill Burk,” to help narrow your search.

This story originally appeared in the GraceConnect eNews. To subscribe to the weekly newsletter, click on the orange box in the upper right of this page.