From Pastor to Chaplain: A Wife’s Point of View

Chaplain (1st Lieutenant) Cameron Michael, one of the newest Grace Brethren military chaplains, is writing as he transitions from serving as a Grace Brethren pastor to active duty chaplain. Cameron is a 2011 graduate of Grace College. Following his graduation from Grace Theological Seminary in 2014, he began leading the Pauling, Ohio, campus of Grace Community Church (Kevin Pinkerton, pastor). He currently is stationed at Fort Bragg, N.C. Below is this month’s post. 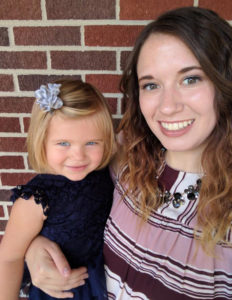 Kerrie and Rylee Michael are adjusting to life as part of a military family.

In July, I did not spend much time with my unit. Instead, I attempted to “become all things to all people,” which means throwing myself out of a military plane way too close to the ground, moving way too fast with a parachute that slows you down enough to land with all the grace of a sack of potatoes. Seriously, I invite you to “google” or “YouTube” PLFs (parachute landing falls).

My wife Kerri agreed to write a little bit about her transition from pastor’s wife to chaplain wife.

I remember when Cameron first started talking about becoming an Army chaplain. I remember thinking it’s just an idea that won’t ever happen. We were comfortable with our life and we were serving God in the local church. Why would we need change? However, I agreed to pray about this and several years down the road, here we are at our first duty station at Fort Bragg, N.C. – home of the 82nd Airborne Division and XVIII Airborne Corps.

There have been some HUGE changes that include moving across the country and some not so big changes, like the fact that we’re still serving God. My husband, Cameron, is definitely gone more now than what I would like. He went through training for three months this winter (January to April) to become a chaplain. That was the longest we have ever been separated and it was extremely difficult for us. However, since I didn’t have Cameron to lean on as much, my faith and trust in God grew a lot during this time. While it was a huge negative to have him gone, there was also a blessing in personal and spiritual growth.

I have already learned that being a chaplain’s wife is definitely different than a pastor’s wife. I won’t necessarily ever know or see the men and women he’s ministering to. I take every chance to meet them but it’s not like pastoral ministry in a local church. As we’re going through these changes in our lives, I have felt that my ministry right now is to my husband. He works long hours, and having a home that is relaxing to him when he gets off duty has been important.

Moving eleven hours away from family has been rough, but the people here have made it so much easier. We had only been at Fort Bragg a few days when other chaplains’ spouses were already getting in contact with me and seeing what we needed. The chaplains’ spouses on post are very active and are great at welcoming in new people. I have been to several events including coffees and picnics during these past few months. These women have been great for me and so patient in answering questions I have and just supporting us during this time of change.

The language used in the Army has been somewhat of an adjustment also. It really is a different culture. We go to the “commissary” to get our groceries, not the grocery store.  Children, when child care is needed, go to the “CDC.” Coming from a medical background I was very concerned about this. Why are we sending kids to the Center of Disease Control?  Don’t worry, it stands for Child Development Center, but that one threw me for a loop. There is an acronym for just about everything, and I am still learning. I don’t think I will ever quit learning those.

Over the next month I am hoping to become involved in our unit’s “FRG.”  It is another acronym I have recently learned. FRG means Family Readiness Group. The FRG works at connecting the spouses and children, that is, “military dependents,” with the soldiers and the unit. It’s a place for spouses to meet and connect, and hopefully a place where I can minister to the soldiers’ families alongside my husband. I have prayed for God to give me courage in stepping up in whatever ministry he wants me in, and He seems to be opening doors to let this happen.  I know this will put me out of my comfort zone and pray I can do God’s will in this area.