From Suicide to Sold Out

Sometime between 1969 and 1970, during my second tour in Vietnam, I met a man who tried to commit suicide at my post in Kontum, located in the northern part of South Vietnam. My ministry was to care for the American military advisors to the Vietnamese forces in the entire province, the largest province in South Vietnam and close to the DMZ between the north and south sections of the country. I regularly traveled in a quite dangerous country. We also had our support troops at the Kontum U.S. military base.

It seemed the moral climate among the U.S. troops had declined considerably since my first tour in the war zone. Drug abuse was more prevalent, and one of the soldiers in my camp was particularly a notorious “junkie.”  His name was Dave (not his real name).

My camp doctor was a committed Christian and we were close friends. One Sunday, I noticed he was not in my chapel service, which he usually attended. As the service ended and I was leaving our small chapel on the compound,  I met him on the sidewalk as he was walking toward the chapel. He said, “John, Dave is in the dispensary. I don’t think I can help him, but I think you can. He tried to commit suicide, but he is stabilized now.”

I went to the dispensary to find Dave. He was on a cot and awake. I put my hand on his shoulder and told him I was the chaplain and had come to see him.  Dave’s response, in a “yelling” fashion, was, “Pray for me!  I don’t even care what you say. Just pray for me.”

“Dave, just calm down and I will,” I responded. He did, and I prayed.

Before I left, I told him he needed to come and see me when/if he wanted to talk.

The next morning, looking like anything but a soldier, I invited him in.

He was extremely angry, and, in my heart, I thought, “This is going to go nowhere quickly.” He argued intensely with everything I tried to share.

Finally, I told him, “Dave, your argument is not with me; it is with the Lord and the message of hope in the Word of God.”

I gave him a New Testament and challenged him to read the Gospel of John, and if he felt like talking after he read it to come back and talk again.

The very next morning, he knocked on my office screen door. He looked transformed.

I told him, “Something has happened, and I think I know what it is, but I want you to come in and tell me about it.”

It was a powerful, precious moment. He said, “I did what you told me and, when I read the words of Thomas, ‘My Lord and my God,’ I fell on my knees and gave my heart to Jesus.” 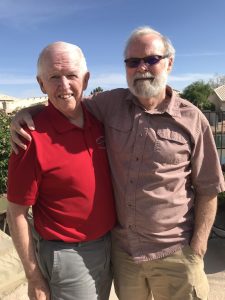 Chaplain Schumacher with his friend, “Dave.”

That was approximately 50 years ago.

Recently, I had dinner with him and his wife. After 50 years he remains radiant and a “sold out” servant of the Lord. We have communicated off and on for all of those years, and he has remained radiant in his faith. As we parted, we hugged, and he thanked me again for what happened in Vietnam.

Through the years, again and again, I have thought that this experience made it worth all I went through to serve as an Army chaplain (two times) in the war zone. – by Chaplain John Schumacher (U.S. Army, Col., retired)

This article first appeared in the Summer 2019 issue of GraceConnect magazine. Click here for more information.