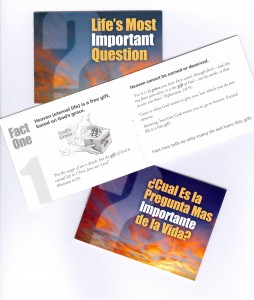 “These are exciting, exciting times to share the Gospel. Thrilling times to be out there where the people are, and the people are more hungry than ever before,” says Wally Bruder. He should know. The California resident spends his free time handing out BMH Books’ tract, Life’s Most Important Question, to Spanish-speaking people in his city.

“I go into a [fast-food restaurant] and the Holy Spirit will single out a family eating lunch or dinner. I’ll be overwhelmed with Jesus’ love for them, and I’m drawn to them. The Lord will give me a word to share with them, and of course I’ll give them the BMH booklet in Spanish,” he says, noting that 95 percent of the time they are open to the Gospel and gladly receive the booklet.

He says he’s well-received. “At first they’re a little shocked, because you’ve approached them and it’s something they’ve probably never seen before,” he says. “And they’re so thrilled to see it in their own language. They’re a little surprised at first, but then they look at you—they look at your face, and in your eyes, and they see Jesus radiating from within you.”

As a follow-up, Bruder writes the name and call letters of a local Spanish Christian radio station on the back of all the tracts. “Because of course, after they read the booklet, it’s brand new and fresh to them. Many of them have never heard the salvation message before. They desperately need follow-through with a Christian witness,” he explains.

“I’m not out there handing out booklets because it’s a thing to do,” Bruder emphasizes. “It’s not a duty or a pressure thing or a guilt thing, like if you don’t witness to people today, God is upset with you. It’s quite the opposite. It’s a divine romance, where He’s so in love with you, and you’re so in love with Him, you can’t help but go out there and just freely hand out the booklet where He leads you.”

“The time is short before He comes back,” Bruder stresses, “so there’s an urgency in my heart more than ever before to increase the number of BMH booklets I’m handing out. Just be out there wherever He would have me, daily, and have him open doors for me. Open doors where I could share even more with people.”