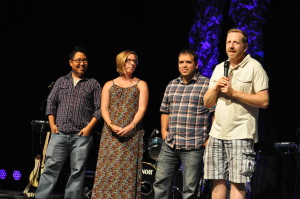 “You grew up stuck between two cultures, so you don’t feel like you have a home either in America or at home. So you always live in this tension.”

Peter Yoo knows that tension quite intimately. As a second-generation Korean-American, Yoo ministered in Shanghai, China, for the past three years, until he and his wife, Anna, decided to embark on a new project: reaching the international community in Atlanta, Ga., for Christ.

The idea was sparked when Dave Guiles, executive director at Encompass World Partners, and his team started praying about the need to reach the international community in Atlanta. The result was a fusion of three organizations: Grace Church of Greater Akron, Ohio (Jeff Bogue, senior pastor), Encompass World Partners, and the Grace Brethren Investment Foundation came together to finance the project and uphold it in prayer.

Bogue has seen God’s hand clearly in the project’s genesis: “We were invited, we recognized the need, and in a six‑month window, God put Grace Church, Encompass, and GBIF together. He also brought in two experienced church planters who are from Colombia and South Korea. We look at that and say, ‘Well, the Lord just decided He wanted something done in Atlanta, so He moved His people.’ That is the only reason we’re there.”

Fusion seems to be the theme of the entire project. The word certainly describes the team that is currently being built – all with the acute understanding of the struggles and joys of those who grow up with parents who left everything to start over somewhere else.

So far, along with the Yoo family, Columbian-American Juan Carlos Téllez and his Canadian-American wife, Emily, have joined the initiative. The Téllez’ have spent the last 11 years in Indiana, and two years before that in Honduras. The entire time they have been preparing for ministry wherever God called them.

“We came to Indiana for the sake of going to seminary, and then we thought we were going to go into missions right away,” said Téllez. “Instead, we had an 11-year detour. We didn’t even buy a house in Indiana because we always had the sense that God was going send us somewhere, and we wanted to be ready whenever He did.”

The plan is for the team of pastors to spend five months at the Akron church before being sent out to Atlanta this December.

“These next couple months we’re trying to discern exactly which community God is leading us to reach,” notes Yoo. “We’re doing a lot of research and prayer and seeking out where God has called us to start this community. Where is there a large population of second-generation people?”

Once they make the move, the first year will be focused on growing the community of team leaders into a community of believers, and after that, a movement of churches.

“We are inviting people to join a community of displaced people, in a sense. And we’re all displaced.  We’re all sojourners. And [in a way,] how is that different from a community that’s already here? We’re going for something that takes the flavors and the riches of our heritage and brings together something that has not been before.”