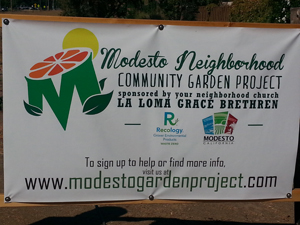 The 50-by-80-foot strip of land sat neglected until the La Loma Grace Brethren Church, Modesto, Calif., took a leap of faith and planted it with a community garden. “It was an eyesore with people in the community, and people are ecstatic that someone is putting it to good use,” says Pastor Joel Richards.

The Modesto Neighborhood Community Garden Project is located on the north side of Modesto, about a mile from the church, and is situated on city-owned property.

“The goal was to put Christians with community people,” said Richards. “We had over a hundred volunteers that weeded and tended the garden. About 30 were from the church, and the rest were volunteers from the community.”

The idea for a garden was born as outreach teams at the church brainstormed ideas for the coming year. Team leaders had talked to a neighbor who expressed that a community garden would be a beneficial addition to the neighborhood. The church decided to explore the possibility, and, literally, dug in.

They planted traditional crops: corn, squash, watermelon, cantaloupe, okra, eggplant, and peppers. “Everything that was grown was given away to whoever wanted it,” says the pastor.

“The garden breaks down all kinds of barriers,” explained Richards.” It’s been a phenomenon. Almost miraculous. The guy right across the street from the garden donated water for us to use one day a week. My son worked side-by-side with a man covered in tattoos and earrings, who helped us dig a water line. I was hardly ever there that someone didn’t stop by and ask about what we are doing, or offer to help in some way.”

“The neighbors have said they’ve seen more families on the walking path that runs behind the garden,” he added.

By now most of the crops are harvest and cleanup has begun in the garden. Plans are in place to plant the garden again next year. – by MariJean Sanders