The Oxford, Pa., Community Courier and TownLively news site has reported the addition of a new pastor on staff at Gateway Church, a Grace Brethren church in Parkesburg, Pa. Gordy McIlroy will begin September 13 as the new pastor of the Oxford Campus of Gateway Church (Scott Feather, lead pastor). A portion of the story appears below. Click here to read the complete article. 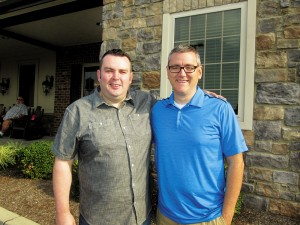 Starting on Sunday, Sept. 13, Gordy McIlroy will be the new pastor for Gateway Church – Oxford Campus.

The main location for Gateway Church is in Parkesburg, with the Oxford campus founded in 2006 by Mike Silliman. Services are held in the cafeteria at the Penns Grove School, 301 S. Fifth St., Oxford, every Sunday at 10:30 a.m.

“We are one church in multiple locations,” lead pastor Scott Feather explained. “The campus in Oxford has been without a campus pastor since June of last year. We started in earnest a search for the right person three or four months ago.”

McIlroy was a likely choice for the position from the beginning. “Gordy had been involved at the Parkesburg campus years and years ago, so we knew him,” Feather said, adding that church leadership felt a connection with McIlroy from the start.

Feather is convinced that McIlroy is a good choice for the position. “There are times, in my view, (when) God makes things so clear that if we don’t do it, we’re going in the opposite direction. And so, for us, having somebody who has a passion to see people connect their lives to God through Jesus is exactly what we want. It’s exactly what Oxford needs,” Feather said. “It’s an opportunity for people in a real-life way and in a tangible way to come across the truths of God’s Word and have it be embodied in a man who lives it and breathes it, who doesn’t just talk it, but walks it. That is super for us.”

McIlroy is originally from Northern Ireland. He has been a part of mission teams all over the world, but his first ministry was as a youth pastor in Vineyard Church in DeKalb, Ill., before returning to Northern Ireland.