GBCanada Broadens Mission to Include U.S.

The summer newsletter from GBCanada USA, the Grace Brethren church-planting organization in Canada, celebrates 20 years of ministry in the country, the development of four continuing churches, and more than 400 Canadians who have come to know and follow Jesus. It also contains news of a shift in ministry area, as the team which birthed a movement in Canada, takes on helping to plant churches in the U.S. Below is a portion of the newsletter that shares about this expansion, including a new, yet-unannounced name. Click here to read the entire issue. (Click here to learn more about GBCanada.) 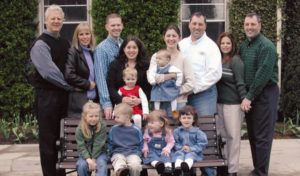 The GBCanada team of young families in 2002.

From three young, starry-eyed families, God has allowed the realization of seven churches, four of whom remain, meeting in seven communities. Over 400 Canadians have come to know and follow Christ, while over 750 gather weekly to worship Jesus and work together to do His mission. These last few years God has been accelerating the rate that He is growing His church through the team and they are incredibly excited about the future here in Canada.

Just as seismic changes occurred within the team and mission 20 years ago, God is birthing another big change. Upon learning of the Go2 Ministry wind-down, the leadership team believed God was directing them to lead and broaden the mission to include helping plant churches and multi-sites in the U.S. The need is great in North America to see new churches reaching new people with the message of Jesus. “This will be a huge shift for us and our team,” declared Nathan Bryant, Executive Director. “We are still committed as ever in expanding throughout Canada and have several exciting projects we are working on which we’ll be unveiling in the coming months.”

Nathan further stated that the team will also be networking and partnering in the U.S. to explore catalyzing and assisting in the expansion of Jesus’ church there as well. Because of this new expansion of mission, GBCanada USA will be changing its name. The next newsletter will not be from GBCanada USA but a new name, with a new logo and broadened focus. “We have recruited new board members with specific skills and background to assist in church expansion,” explained Nathan. “We already have a number of amazing projects that we will be announcing in the next newsletter, under our new banner. We are not as young as we used to be but we still believe God wants to do amazing things through us.” The team attributes its ability to respond to this call to its faithful supporters, who have patiently partnered with them through these last two decades. Nathan further explained, “The partnership in prayer, encouragement, financial support and those who physically traveled here to help, has been our endurance with God as our strength. I believe the future is greater than the past and is only possible through Christ as we work together. Look for the change that’s coming. God is moving and we are following His lead.”