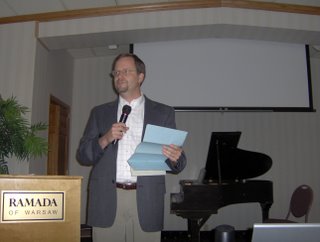 Guiles, who has just returned from several weeks in Africa, gave updates from various fields where Grace Brethren missionaries are working. In beginning his remarks, he displayed a missionary contract from the early 1900’s with pioneer missionaries to Argentina, who at that time made a seven-year commitment to stay on the field and were paid $90 a month.

A number of volunteers and retired missionaries were honored before the approximately 100 people who attended. Among those honored were members of a Global Prayer Group from the Winona Lake, IN, Grace Brethren Church, who have been meeting every Wednesday night for a number of years to pray for Grace Brethren missionaries. Several missionary recruits currently attending orientation sessions were also present.