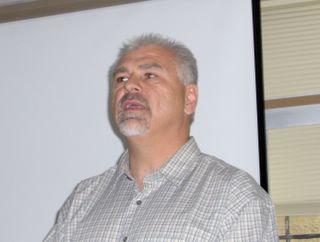 Tim Boal, pictured here earlier this summer speaking at the DRIVEN conference, narrowly escaped a real tragedy with his family this weekend when their car was totaled while enroute to Brethren National Youth Conference in Ohio.

The accident happened Saturday, near Reynoldsburg, Ohio. Boal, who is pastor at Penn Valley Grace Brethren church in Telford, PA, was driving with his wife and two sons in the car when a tractor-trailer jacknifed ahead of them. In the chaos, another truck lost its trailer, which was hauling a Bobcat, and in swerving to miss being crushed by the machinery, Boal’s car went down into the median strip and hit a bridge abutment.

Though shaken up badly, none of the family sustained serious injuries. Boal’s wife, Tammy, was transported to one hospital and one of his sons to another, but after checkups they were released and continued to BNYC, which is being held on the campus of Cedarville University near Springfield, Ohio.

In describing the accident, Tim Boal was quick to express thanks for God’s protection. Since so many of our FGBC leaders travel almost continuously, this incident is a good reminder to continually pray for those who are traveling both domestically and abroad, and to thank God for His protection.

In other health-related news, Grace Brethren around the world have been praying for the health needs of Nancy Peugh, former missionary to Germany and wife of Grace College & Seminary professor Roger Peugh.

Having gotten past one heart-related incident several weeks ago, Nancy again experienced symptoms recently and was again taken to Lutheran Hospital in Fort Wayne, IN, for further tests. The Peughs will appreciate your continuing prayers.