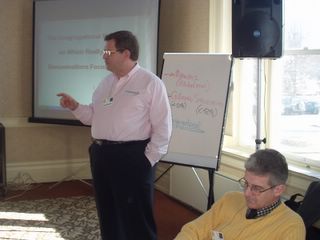 George Bullard, pictured here as he consulted with Grace Brethren leadership at a “Gathering” last March in Winona Lake, Indiana, has been engaged several times as a growth and church-planting consultant for the FGBC. Today’s Baptist Press release announces new leadership duties for Bullard. In photo at lower right is Grace Seminary faculty member Ken Bickel, who also is immediate past-president of the Association of Grace Brethren Ministers.

Bullard has served as BSC associate executive director since July 2003.

The BSC executive committee also approved outgoing Executive Director Jim Royston’s request for an eight-week study leave until Sept. 15, when he will retire from denominational service. Royston is expected to become senior pastor of First Baptist Church in Mooresville, N.C., pending approval by the congregation July 17.

Bullard stated for the record that he will not be a candidate for the permanent position, based on his personal belief that persons in interim positions should not be considered on a permanent basis, the Recorder reported.

Royston told the executive committee that he and his wife Jeannie clearly sensed God’s leadership in returning to the pastorate. “I love this convention,” Royston said, as quoted by the Recorder. “I love the things we’ve got going. I pray that none of them will stop. We have a wonderful staff, I’ll do all I can to help.

“I appreciate your graciousness and generosity, and leave with great hopes for the future,” Royston said.