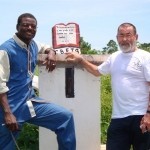 Heidi Sisson, who works with GBIM in Bangui, Central African Republic, has been sending updates on the German builder who has been working on building the seminary facility in Bangui.

Berno Pfrommer (right), is pictured here  with Dr. Francois Ngoumape at the James Gribble Ministry Center where the new seminary is being built.  Berno is from Germany and he has been coming to Bangui to help oversee the building of the seminary.

He was back in Germany visiting his family and was due to return to Bangui on July 27 but on July 23 he had a massive heart attack and has been in the hospital in intensive care since then.  The doctors had to work on him for forty-five minutes before getting a pulse.  He is being kept in a medically induced coma and is able to breathe on his own, but the doctor has had to start dialysis because his kidneys aren’t working

Pray for Berno, his wife Sigrid, his children and grandchildren during this difficult time.  Some of the later updates indicate that he continues to recover, but progress is slow and the extent of his eventual recovery is unclear.