A group of family and friends recently celebrated the birthday of Alberta (Bertie) Hanson, who one-time served on staff of the North Long Beach (Calif.) Brethren Church (now closed). Linda Dilling, Bertie’s niece, sent along this story of a gift with a lot of memories. 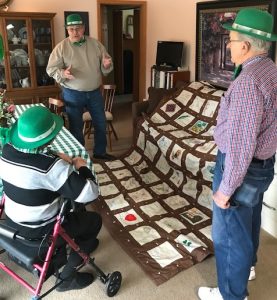 Here is the story behind the group that made up Bertie’s Birthday Celebration. The players are Alberta Hanson, Ivan Schuler, Noel Hoke, and Linda Dilling. Diana Kehler Schuler and Richard Dilling rounded out group.

Noel had a large quilt that the late Joan Lesh Hoke had bought at Ivan and the late Carol Schuler’s auction when the Schulers moved to Grace Village. The quilt had been given to the late Marjorie Davis by members of North Long Beach Brethren Church when she moved from California to Grace Village in the the early ‘80s. Marjorie herself had embroidered one of the 63 blocks that make up the 9 x 7 quilt squares. Other names that would be recognizable are George and Mabel Peek, long-time pastor and wife of the North Long Beach Brethren Church where Alberta Hanson and her niece, Linda Dilling, had been members and the church where Richard and Linda Dilling were married. Other blocks are from the Terry and Patsy (Schofield) Lambert family, the Ralph Colburn family, and the Dave Miller family.

Too large to be displayed in Marjorie’s apartment, the quilt was given to Majorie’s daughter Carol where it hung for many years on the staircase wall of Ivan and Carol Schuler’s home.

Upon graduation from Grace College, Joan Lesh moved to California where she worked as an administrative assistant for the Grace Campus West from which Alberta received her doctorate. Joan maintained a close friendship with Alberta and with many others from the NLB brethren church. When that campus closed, Joan returned to Winona Lake and eventually married widower Noel Hoke. Hence her interest in the quilt which contained the names of many of her former friends and acquaintances.

Following Joan’s death, what to do with some of her possessions became a topic of discussion among the men at informal daily lunches at the local McDonalds. Richard Dilling and Noel Hoke, who have been long-standing friends since playing intramural basketball during college/seminary days, are two of the regulars at the noontime gathering. Alberta Hanson, now living with Dick and Linda Dilling, had been Noel’s Spanish teacher at Grace College in the early 60’s. So Noel offered the quilt to Dick to give to Bertie.

When Dick brought the quilt home, Linda was so impressed with its value that she decided the “big gift” needed a little fanfare in its presentation to Bertie. It became the focus of the St. Patrick’s Day themed birthday party on March 11 for Bertie’s 92nd birthday when Noel presented it to Bertie, and Ivan and Diana were on hand to go through all the names on the quilt and recall good memories of years gone by.