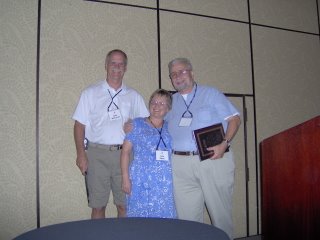 Shirk, who just completed 25 years as pastor of the Grace Brethren Church of Ripon, California, was born in Modesto, married Lois Miller in 1966, and the Shirks have five children.

Trained as a physician, Dr. Shirk was in practice practice in pediatrics in Modesto when, after eight years as a physician, he felt called into the ministry. At age 35 with a wife and five children, Shirk entered Talbot Seminary and earned an M.Div. degree.

Called back to Ripon to pastor, he has served there 25 years. Under his leadership the Ripon church has sent out nine teams on overseas projects. Their annual golf tournament to raise funds for the projects netted $50,000 this past year.

Dr. Shirk still spends one morning each week in a local pediatrics office. The church also has a children’s center which enrolls about 80 pre-schoolers. One of the Shirks’ sons, John, is a Grace Brethren North American Missions missionary to urban Chicago.