Word has been received of the death of former Grace Brethren pastor’s wife, Glyndowyn Harris. Her obituary and other information appears below. 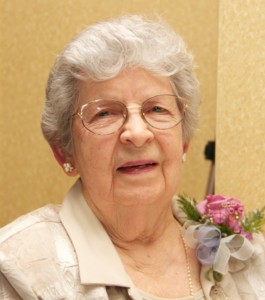 Glyndowyn Coral Hage Harris, 94, died sleeping during the early morning of January 7, 2016. She had been living in Longview, Tex., since August of 2007. The last few years there she lived in senior facilities, moving into assisted living in May 2015.

Glyn was born September 12, 1921, in Muskegon, Mich. After graduating high school she left Muskegon to attend Wheaton College in Wheaton, Ill., near Chicago. During her time at Wheaton, she met her future husband, Vernon Harris, whom she married in August 1943, after graduating from Wheaton in June.

Following her husband’s graduation from Grace Theological Seminary, Winona Lake, Ind., the two of them served for more than 50 years as pastor and pastor’s wife in Grace Brethren churches from coast to coast. They began in Clayton, Ohio, then moved to Portland, Ore., then to Roanoke, Va., back to Ohio, this time Akron, next moving to Philadelphia, Pa., and finally Lancaster, Pa., area where they served in several churches. After Vernon retired for the last time, he and Glyn moved to Pottsboro, Tex., in the fall of 2002 where they lived for five years before moving into their son Rudy’s home in Longview, Tex.

Vernon and Glyn were both talented musically; in most of their churches Glyn played the piano for services and accompanied Vernon as he played the coronet. During their college and seminary years they often traveled to churches to play special music, with Glyn playing the accordion.

During Glyn’s years as a pastor’s wife she was an asset to her husband’s ministry in many other areas besides music. She led the women’s ministry, headed up Vacation Bible School, often superintended the Sunday School, and handled many secretarial duties. In each of these areas, she trained others to take her place whenever possible; she never wanted to be in the limelight but was always willing to serve.

While living in Virginia, Glyn began teaching school. She started in a Christian school there, and for the next 25 years taught in public and private schools concluding in Lancaster, Pa. In Philadelphia she served as a principal as well. All through these years she was respected by her peers, appreciated by her administrators, and loved by her hundreds of students.

Vernon and Glyn reared a family of six children. Ronald and Ramah Lee were born in Indiana while Vernon was in seminary, Roy and Rudy in Clayton, Ruth in Portland, and Randy in Roanoke. Family was important to both parents and they spent time each summer with their children at lakes enjoying water sports and camping. Passing on their Christian faith to their children was also very important. They succeeded in this area by living each day according to their faith and being a positive example.

Glyn was preceded in death by her parents, Thomas and Cora Hage, of Muskegon, as well as her siblings, Russell, Gladys, and Betty; her son Rudy, her grandson James Blake, and her husband Vernon. Glyn and Vernon celebrated their 65th wedding anniversary before his death in September 2008.

Glyn is survived by five of her children and their spouses: Ron and Priscilla Harris of Ft. Worth, Tex.; Ramah Lee and Chester Stewart of Lancaster, Calif., Roy and Kathy Harris of Waxhaw, N.C., Ruth and Steve Blake of Bensalem, Pa., and Randy and Debbie Harris of Chicago, as well as Rudy’s widow, B.J. Harris of Longview. Also surviving are 14 grandchildren, 12 great grandchildren, and several nieces and nephews.

Glyn Harris was a godly woman who will be dearly missed by children, family and friends. She corresponded with many over the years, encouraging all she knew and loved with caring cards and letters.

Mrs. Harris will be interred in Longview, Texas. Any correspondence can be sent to: Randal Harris, PO Box 1, Dolton IL 60419.