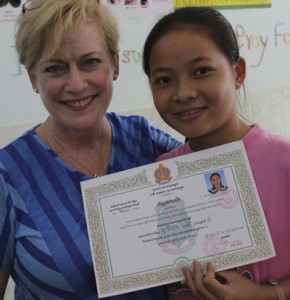 Gwen Higaki and her husband, Vernon, have made 10 trips to Cambodia, and anxiously await number 11 in January.

“People say to us, ‘Oh, it must be beautiful if you’re making so many trips!’” Gwen says. “And we look at each other and say, ‘No, it’s not beautiful — it’s a third world country. But it’s where God called us.”

For more than 20 years, Higaki (pictured at right, in blue) worked for a Fortune 200 company, climbing her way up the corporate ladder.  In July 2009, after leading her church’s first missions trip to Cambodia (Western Reserve Grace Church in Macedonia, Ohio, pastored by Jason Haymaker), Gwen returned home to learn that her father had committed suicide.

“My dad had been such a powerful force in my life,” she said. “He was a great dad and mentor in my career. When he was gone, the only ‘dad’ I had was God. I knew I had to trust him and give him control.”

The grief that followed and the subsequent drawing nearer to God caused Higaki to question her ambitions – and it also planted in her a seed of inspiration: She wanted to return to Cambodia.

“In my prayers before this first trip, I clearly heard God whisper, ‘Go and I will take care of you, in that order.’ He was very explicit that it would have to be ‘in that order.’ I had to return to Cambodia to make sense of my grief and to learn what God had next for me.”

The second missions trip in July 2010 had a very different ending. Higaki and her husband joyfully rededicated their lives to Christ when they were re-baptized in Battambang, Cambodia. And then God laid a burden on her heart.

“In Cambodia we saw firsthand the poverty and the extent of Buddhism throughout the country,” she recalls. “People that were scarred and maimed from polio and there were orphans everywhere you look.”

Once home again and back at work, her burden only grew – particularly for the countless orphaned children. “These kids — if they’re not educated, they’re going to go right back into the poverty that they came from.”

The question was: who was going to do it? With all of her experience in the business world, Higaki felt a growing impression that her unique experiences and gifts would be a perfect fit for Cambodia’s need. She was the one meant to take ownership for making the idea a reality.

“I realized that all this competition, all this education, was really getting me to this point where I was able to say, it’s my turn, I can do it. It landed on my heart – no one else’s – something had to be done. I know that the work in Cambodia is what I was designed to do.”

The next question was when? Higaki wrestled with this calling that was imperative in exchange for the career she had spent her lifetime building. The company she worked for was going through another merger and acquisition. In early 2011, Higaki’s boss approached her about a new job opportunity.

“My boss took me out for breakfast to tell me that I was going to be given this sweet new position. I will never forget the look on his face when I heard him out but I said ‘thank you but no thank you’ — because I’ve found out that I have this small time in my life that I can make a difference to God’s kingdom and it was time for me to do that.”

Later in 2011, Gwen founded and became executive director of Bright Start Learning, which provides remedial learning and educational assistance to children in poverty-stricken Battambang, Cambodia, and the surrounding villages. Since its beginnings, BrightStart has grown from 25 to more than 600 children, and offers eight different study centers across the city. You can find out more and how you can pray or give at brightstartcambodia.org/.

BrightStart Learning, in cooperation with Encompass World Partners, also offers three-month to one-year internships to young adults called to ministry in Cambodia. Check out this link for more information.

[Connect:] Send a note of encouragement to Gwen at gwenhigaki@gmail.com.