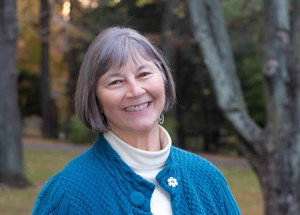 Many people attend their churches on Sunday, sitting in the pews, singing in the choir, and hearing their pastor in a pulpit. But not every worship service is the same. Some don’t even take place in a designated building. For Peggy Owens of Winona Lake, Ind. (pictured at right), her church has been inside the Kosciusko County Jail for many years.

Peggy’s path to the county jail, located in Warsaw, started in 1999 when she attended a women’s mission trip to Urban Hope in Philadelphia, Pa. The leader asked a question that plagued Peggy: “What percentage of your time do you spend with people who don’t know the Lord?”

Her “percentage” was low, as she was constantly surrounded by fellow Christians at her work, church, and spare time. This analysis didn’t sit well with her, and upon returning home from her trip, Peggy approached the chaplain of the jail and asked if there was a way she could contribute. As it happened, the chaplain needed someone to lead music for Sunday morning services.

“I’ll miss my church,” was Peggy’s first thought, but God tugged at her heart and, as the weeks went by, gave her a real love for the inmates.

It has been almost 18 years since her first Sunday, and Peggy, now assistant chaplain, is still leading worship music from her keyboard for several Sunday services from 6:30 a.m. until lunch time. She also helps teach the women in their blocks on Mondays and Wednesdays, leads music for the Work Release Jail service on Thursday evenings, and facilitates a Friday night Bible study for released inmates and their families.

Over the years she has heard the words, “I want what you’ve got,” and she loves to tell them that it is the Lord and they can have Him, too! Peggy explains, “There is so much excitement in sharing God’s love with people who see their need for Him.”

Peggy graduated from Grace College with a degree in Music Education. Providing music for the worship services and teaching piano lessons to children of the jail guards has been a favorite way to use this gift.

She retired last year after 26 years working at CE National where she had received the 2008 Wall of Honor award for evangelism and discipleship for her volunteer work in the jail. Also in 2008, the Kosciusko County Community Foundation, because of the ministry team and letters from the jail inmates, honored Peggy with the Heart of Gold Award that included a gift of $1,000 for her ministry.

Peggy is the mother of three children, a grandmother of ten, and a great-grandmother of fourteen. At 72, she can’t think of a time in her life when she has had greater joy serving God than she does today, right in the local jail where He has called her. –by Haley Bradfield

[Connect:]
Send a note of encouragement to Peggy to munkao10@gmail.com.