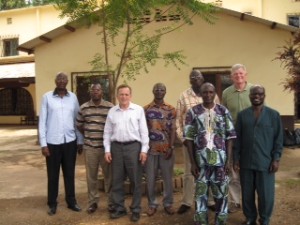 Distant gunfire shatters the warm morning air near the Bokoto Bible translation office in Carnot. The three translators look at each other. Staccato bursts of machine gun fire, closer now, jolt them into action. They dismantle and hide solar panels they use for power. Unplug their laptops. Gather materials. And head for the nearby forest to continue working. When batteries run out, they switch to notebook paper. The Bokoto team learn how to protect themselves, and how to eat. Out in the forest, caterpillars and wild yams become their fare. They keep working with a combination of faith and grit.

“Only God’s Word in the heart language, and in the hearts of the people can change the chaos in our country,” one translator said.

More than 1 million people have been displaced in the CAR. As they return home, many find burned houses and fields. Loved ones have been killed in the attacks. They are grief stricken and hopeless. But now, 130,000 Bokoto people can find comfort and hope as Scripture becomes available in their language for the first time.

For church leaders at Grace Church in Powell, Ohio (Rick Nuzum, lead pastor), it’s a joy to support Bokoto translators (pictured at right) so they may bring God’s Word to their own people. The idea surfaced as local Brethren pastors in Bokoto territory saw the need for the people to understand God’s Word. At the time, much of what was being preached was in the national language of the CAR — which many native people don’t speak or understand. As a result, churchgoers often confuse Bible tenets as mere rituals to incorporate into their traditional African religion.

In 2010, the Seed Company, a Wycliffe Bible Translators affiliate, joined with the Bokoto and eight other communities to help them translate God’s Word into their own languages. Their goal was to translate the Gospel of Luke and scripting for the “Jesus” film. But first the Bokoto and the Banda-Linda needed an alphabet. A linguistics organization helped facilitate the need. Once alphabets were completed, translators from all eight people groups began working together.

In 2012, all eight communities received the translation of Luke, and saw the “Jesus” film. For many, this was the first time they had ever heard Scripture in a language they understood. Often they exclaimed, “God speaks our language! Jesus is one of us! He knows us.”

Back in Powell, Ohio, Peter Pavarini, an elder at Grace Church, learned of the translation project and met the translators when visiting a medical outreach in the CAR with lead pastor Rick Nuzum. Their passion to help these Bibleless people spilled over into their conversation with Tim Farner, missions pastor at Grace Church, Powell.  Tim quickly caught the vision, as did the rest of the church. The church connected with Grace Brethren pastors in the CAR to offer prayer, advocacy, and support for the translation.

“Over the last 100 years, we as a fellowship, have invested deeply in ministering to the needs of people in this war-torn country. Now is the time to finish the task,” Farner says. “We have the resources that can empower the national church to take discipleship to the next level in life transformation.”

The Bokoto team is working toward completing the New Testament, five Old Testament books, and producing an audio version of Scripture for oral learners by 2019.

To learn more about the Seed Company or become a prayer or financial partner with the Bokoto team’s translation initiative, click here.

Find out more about how you can pray or get involved or to send a letter of encouragement to Pastor Tim, email tsfarner@gmail.com.

Grace Beight contributed to this story. Grace was an intern at Grace Connect during spring semester 2016. A native of Amherst, Ohio, she graduated from Grace College in May.