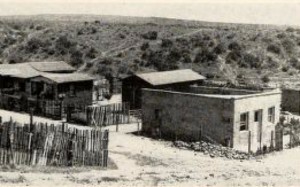 At the time of this story by Amy Guerena, published in two installments in the last 1959 and first 1960 editions of the Brethren Missionary Herald, Phillip Guerena was a senior in Grace Seminary, looking forward to missionary service In Mexico. He and his wife, Amy, and their baby daughter spent the summer of 1958 in Mexico, where they engaged in secular work to earn their livelihood and make possible a spiritual ministry to the people.

So far it had been a very ordinary day.

“Are you ready?” called Phil as he loaded songbooks, accordion, lantern, and baby into the jeep for our evening service. Phil gave a short message from God’s Word. Gradually the building emptied. “Buenos noches,” we called as we reloaded our equipment, plus several boys and girls, into the jeep. In just another moment we would be home.

Just then our ordinary day came to an abrupt end as the frightened voice of eleven-year old Jose exclaimed: “Felipe, my father is on the attack, and my baby brother is still in the house. He will kill him.”

“I will go and get him out,” said Phil immediately. He swung the jeep about and drove the short distance to their little cabin. The moment we stopped before their home, out rushed the father. In one hand he held a lighted lamp, and in the other he held a rifle which he was trying to cock and fire at whoever had just entered his yard. In the glow of the kerosene lamp, we saw his face distorted with rage, and his huge shoulders heaved as he looked about for us in the darkness.

Phil immediately turned off the car lights, backed up, and drove to the welcome refuge of our own little cabin. We locked both doors and gathered the children about us to pray.

Just as we finished praying, Jose, his mother, and the other children came to the door. And yes, there was the smallest brother, asleep in the strong arms of one of our Christian men. Quickly and quietly we helped them get settled for the night in an empty cabin nearby. We went back to ours, but not to sleep. Phil had promised to visit a sick lady that evening.

My heart sank as I watched him drive away. I seemed to be gently reminded by the Holy Spirit: “You must be willing, Amy, to let God have your husband even in this.”

Suddenly three gunshots broke the quietness. Quickly I grabbed Lorita from the bed and tried to calculate my chances of escape should he force his way through the front door. It was evident that no lock could keep him out, for his strength was that of a madman.

“There shall no evil befall thee, neither shall any plague come nigh thy dwelling” (Ps. 91:10). The words comforted me now as I remembered the Lord’s protection in the past. Although it seemed much longer, it was really only about an hour and a half from the time that he had left until Phil knocked. Eagerly I opened the door and plied him with questions about the gunshots which I had heard.

Yes; G had fired the shots as he talked with some of the men with whom he was drinking. But he had hit no one, and then he had run off into the forest.

God had taken care of us. Phil, Lorita, and I, as well as the villagers, were all safe. Again we prayed that God would protect us, and then we went to bed. I did not waken until the bright sunlight came streaming in through the windows.

Phil soon had a roaring fire going in my barrel stove, and invited Jose’s family to eat breakfast with us. It was then that we learned just how greatly God had undertaken in our behalf the night before: our interference had saved the life of a man. A friend of the family had come to the house drunk and flopped asleep on a bed. Later, when the husband had come in, under the influence of liquor himself, he had become infuriated at the sight of his friend sleeping on the bed. Intending to kill him, he had gone into the kitchen to search for shells. It was at that moment that we drove into the front yard, and when he ran out of the house he forgot all about the man inside.

All things had worked together for good, even for the salvation of a soul, for later that same morning Phil had the privilege of leading G to know the Lord as his Savior. God had answered prayer exceeding abundantly above all we had asked or thought.

Phil Guerena now leads Grupo Amor Cristiano, a Spanish-speaking Grace Brethren church on the northwest side of Columbus, Ohio. Send he and Amy a note of encouragement at paguerena@northwestchapel.com. Read the unabridged story on the Brethren Missionary Herald Digital Archives, Part I and Part II.