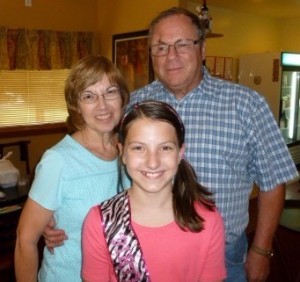 Raymond and Susan Tarr with their granddaughter.

When 66-year old Raymond Tarr of West Kittanning Grace Brethren Church was 19, he had his ducks in a row: he had graduated from high school in 1968. He’d attended Kittanning church all of his life and was baptized at age 18. He had a steady girlfriend of two years, and was on track to fill his father’s footsteps as a bricklayer. What could go wrong?

Tarr was about to find out. He was drafted into the Army in July of 1969, leaving behind his girlfriend, Susan, with an engagement ring. He left for Vietnam in December. Trained in armored tracked vehicles, Tarr got assigned to a Sheridan Tank as a loader. The everyday realities of the war were even worse than he had anticipated.

“We just went around through the jungle looking for the enemy,” said Tarr. “We slept out behind our vehicles every night. It was dusty, it was dirty. There were scorpions, there were mosquitos, there were bees. Every day was the same.”

On June 12th, 1970, Tarr was in the lead tank on a mission to protect a road that was being maintained for American soldiers.

“Next thing I know… there’s a lot of gunfire,” Tarr remembers. “I looked at my left arm and saw shredded flesh. My left leg was bleeding badly, too.”

Tarr vaguely remembers being picked up by his flak jacket.  “I remember the medic holding my hand and I was really frightened, and I was praying out loud. I thought I was dying.”

Tarr woke up in a hospital in Long Binh, outside of Saigon. He was covered in bandages and had tubes coming out of his body. He soon discovered that his arm was broken in two places, and he had a hole in his colon.

“I had a bandage over my right eye,” he remembers. “I had a big gash in my lower back and a big scar down my left leg. I had nerve damage in my left arm and hand. I kept trying to see light through the gauze over my eye.

Often when faced with tragedy, the automatic question is, “Why me?” When Tarr asked this question, God spoke to his heart.

“God talks to you. You didn’t really hear Him, but he said to me, ‘Why not? You’re not any better than anybody else.’ The guy in the tank behind me [when I got shot] –they shot him through the head twice. What if the lieutenant would have said, ‘3-8, you run in second, and, 3-7, you’re in first’? I thought about my cousin Allen; when he was a little boy, he lost sight in his right eye. He did fine, and I would be fine, too. So I felt better.”

Tarr stayed in the Vietnam hospital for two weeks, and then was sent to Camp Drake Army Hospital in Yokota, Japan, for extended recovery. God worked through his recovery – Tarr recalls the doctor preparing him for surgery to remove bone chips from the outer covering of his brain, but God answered his prayer and the surgery never happened. “As far as I know, the bone chips are still in there,” he says. “They never hurt a thing.”

Tarr was discharged from the Army and returned home after spending six months in Army hospitals. He married Susan on June 12, 1971, one year to the day after he was wounded. He found a job as a dental assistant and worked his way up to lead dental lab technician. He worked there till 2000, and retired at age 50.

“God was good to me. God gave me a wonderful wife, we have two wonderful children. So I got everything I wanted.”

(Editor’s Note: Tarr was discharged from the Army and returned home after spending six months in Army hospitals. Despite his injuries preventing him from following through with his plans to be a bricklayer, God provided using people in the Fellowship of Grace Brethren Churches. Layne Leoffler, a member of the Grace Brethren church in Washington D.C., befriended him and helped him receive the VA compensation he deserved. James Dixon, then pastor of the church in Washington, D.C.,  had encouraged people in the congregation to visit Tarr as he was recuperating in the hospital.)
—
[Connect:]
Raymond Tarr and his unit were awarded the Presidential Unit Citation by President Obama in 2009 for the rescue of a 100-man infantry company trapped in a bunker – a story recounted in the book, Blackhorse Riders. In 2016 the story of this rescue will be aired on the American Heroes Discovery channel. Raymond continues to be active at the Grace Brethren Church Kittanning, Pa. (Larry Edwards, pastor), serving as an elder there. Send the Tarrs a letter of encouragement at starr8@windstream.net.