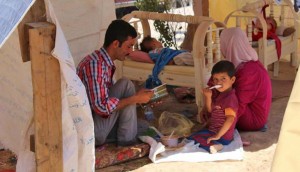 Refugees in northern Iraq have retreated to tents outside of a church.

One Grace Brethren church will put feet to the ground in response to the alarming news of Christians being tortured and killed in Iraq.

Grace Community Church, Goshen, Ind. (Jim Brown, pastor), is collecting funds to help refugees affected by the crisis in northern Iraq and will deliver those monies personally in early September.

Wanting not only to help financially, but also to go and encourage the people, the staff at the church began to make phone calls. One led to an Iraqi Christian in Canada whose son-in-law pastors an evangelical church in Iraq. She confirmed that it was a dire, desperate situation for the Iraqi Christians, according to Ted Rondeau, executive administrator and director of community outreach and international mobilization at the Goshen church. He said that she cried when he told her that they wanted to personally deliver the funds and pray with the people.

The church has set up a website, http://www.gracecommunity-church.com/#/home/grace4iraq, where funds can be collected. Other congregations are invited to join them in giving to the project. Already, more than $35,000 has been raised and they expect to at least double that.

All funds given will go directly to relief efforts. Rondeau says they have been told that the items needed are readily available in the marketplace, but that most refugees don’t have the money to purchase them. Winter is approaching and there will be a need for warm blankets, heater stoves, and heavy clothing.

In addition, Rondeau, Brown, and six other men from the church will travel to Iraq on September 1. While delivering the donations, they will meet with refugees to encourage and pray with them. Working with the local pastor, they will also explore opportunities for further relief activities that would be combined with evangelistic outreach.

Rondeau requests prayer for the logistics, connections, and details that must come together. Pray also for their safety and security as they travel and for the Iraqi Christians with whom they will meet.

“We want our arrival to be a blessing,” he said. “There’s a sense from the pastor and the Iraqi missionary that for us to show up will speak volumes – to sit with them, and pray, and hug their necks and say that God has not forgotten you. Pray that is the sentiment that comes through.”

He also stressed prayer for the refugees. He noted that the local pastor is noticing despair among the people as they question why God has let this happen. The pastor also related that most of the Iraqi Christians are not hateful toward the terrorists. “Their overwhelming prayer is that Jesus would reveal himself to the ISIS soldiers along the road like he did with Saul, who was persecuting the Christians,” Rondeau reported.