From today’s Warsaw (IN) Times-Union newspaper: 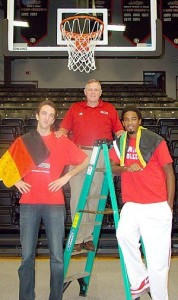 “I need to get bigger and used to college and all the studying,” Makolli said.

Both men travelled a long way to get to Winona Lake, Makolli coming from Germany and Williams finding his way to the school from Jamaica.

Along with hailing from faraway lands, Makolli enters school at seven-feet tall, while Williams is right behind him at 6-foot-11.

No matter where they came from or how tall they are, both men are engaging and very happy to be at Grace College.

“It’s like a big family,” Makolli said. “They don’t only see you as an athlete here, but they see you as a person. They want to get to know you.”

Williams actually began his collegiate career during the 2010 spring semester, which he completed with a 3.4 grade point average.

Among the best teachers both guys have is Kessler.

“He’s like a father, a mentor to me,” Makolli said.

Growing up in Kosovo, Makolli was the son of a mayor who was forced to flee to Germany in 1992 among conflict in the country. After a year, Adrian, his mother and sister joined their father.

In 2008, Makolli became a foreign exchange student at South Bend Riley, where he lived with a family that had also taken in the friend of his sister, Albina.

However, during his year at Riley, Makolli wasn’t allowed to play basketball because of an IHSAA rule that wouldn’t let him play because he had also competed in Germany – a rule affectionately named the “Rick Fox Rule” in this area.

After hearing about the 6-11 junior, Kesler hit the recruiting trail to recruit Makolli to Grace. To his surprise, the German-native still had a year to go before graduation.

“I thought he was a senior,” Kesler said.

With a year ago, Makolli moved in with Scott Silveus and attended Lakeland Christian Academy, a non-IHSAA school last year, allowing him to play.

“It’s all God’s plan,” Makolli said. “From coming to America to not playing at Riley and then coming to this. It’s something I wouldn’t have thought could happen while I was in Germany. Nothing is easy. You just have to work hard.”

Makolli’s arrival at Grace couldn’t have been predicted, but his journey was more likely than Williams’.

“I was raised in a violent community, then we moved into a rural area, out away from everything,” Williams said about his Jamacian upbringing.

After his father passed away, and his mother became ill, Williams became the man in charge of his brother and his sister at the age of 15.

“With my mother ill, and my father deceased, I had to step up and be the man of the house,” Williams said.

To help his situation, Williams turned to basketball, attending the Jamaica Basketball Association, a camp, for four years before catching the attention of Grace alum Richard Coley.

“Rich talked to me on a Wednesday and told me I’d be going to Grace College and to stay away from recruiters, but I was skeptical because I’d been told that before,” Williams said. “From there, I stayed away from recruiters and scouts, because I was waiting for a call from Coach Kessler. I was really excited about it, but still skeptical. I went and did my SATs and filled out my application form. I kept calling Coach like crazy, and then I’d wait for him to call back.”

Kesler did return the calls and eventually came to Jamaica to see Williams play.

“I just needed to calm down and play,” Williams said about his audition for the Grace coach.

Williams remembers getting a breakaway dunk that he missed, but that didn’t deter Kesler.

“At the end of the scrimmage, he did two drop-step dunks,” Kessler said. “I said, ‘I can’t teach that.'”

And Kessler also couldn’t teach the committment Williams seemed to already have.

“He told me, ‘Coach, I need to come to Grace,'” Kesler said. “That was the first time I had heard that.”

That committment shows in the way Williams talks about his pursuits in life.

“I don’t want a job, I want a career,” the 24-year-old majoring in business information technology and web design said. “To get that, you need a college education.”

“I’ve been working on putting on weight, now I need to work on getting in shape,” Williams said.

When Williams stepped on campus in January, he weighed in at 210 pounds. Now, he’s moving the scale up to 225.

And the facilities are a little better at the Orthopaedic Capital Center than the courts in Jamaica, where basketballs aren’t abundant.

“These facilities are like, ‘Wow, out of this world,” Williams said.

And while both guys are adapting to their new environments, they seem to share a close bond.

“Big guys like to be together,” Kessler said. “They understand things about each other. There’s a kind of bond.”

One of those bonds is hearing the same kind of comments, like the redundant joke, “How is the weather up there?”

“I usually tell them it’s a little cleaner,” Makolli, who is majoring in business and sports management, said.

They do have each other, but they also have contact with their immediate families, with Williams speaking with his brother and sister via Facebook and Makolli also turning to the Internet to communicate with his family.

“You really miss your family,” Makolli said. “I’ve gotten used to it. At first, it was hard, but in my second year it got better. Now, it’s more of a routine. I have a new family. My parents know I’m in a good place. I return home in the summer, and they visit about twice a year. We also talk on Skype once every two weeks or so.”

Makolli and Williams have used their height to their advantage, with Williams eyeing a much better future thanks to a college education.

“This is big, very big,” he said. “I’m focused on school, getting a better life and basketball, and I can’t fail.”