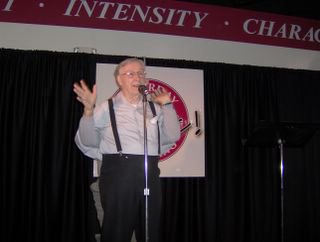 The program was held in the Gordon Recreation Center on the Grace College campus in Winona Lake, Indiana.

The alumni homecoming theme is music this year, in honor of the 50th anniversary of the founding of the Grace College choir. An alumni musical concert was held at 1 p.m. in the Winona Lake Grace Brethren Church, featuring trumpeter Phil Norris, pianist Alex Thio, and others.

An alumni choir rehearsal will be held at 4 p.m. today in the Rodeheaver Auditorium, followed by a concert later this evening featuring favorite repertoire from the past 50 years.

Class reunions will also be held, as well as an all-alumni dinner preceding the concert.