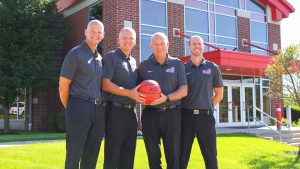 Dan Davis, Chad Briscoe, Bill Katip, Scott Moore celebrate the inking of a contract that extends the NCCAA contract with Grace College as the host for the Division I Men’s and Women’s Basketball National Championships through 2023.

The National Christian College Athletic Association (NCCAA) has announced a contract extension with Grace College as the host for the Division I Men’s and Women’s Basketball National Championships through 2023.

The championships will be held on the Grace campus in the beautiful 2,200-seat Manahan Orthopaedic Capital Center in Winona Lake, Ind.

Grace has served as a national tournament host since 2009, hosting the NCCAA women’s basketball championships for three years before adding the men’s tournament in 2012.

“Some traditions simply merit being continued, and Grace College’s outstanding hosting of the NCCAA Div. I Men’s and Women’s National Basketball Championships is just such an event,” said NCCAA Executive Director Dan Wood. “For the participants, fans and volunteers, it is just an A+ caliber experience.”

The championship will be held each March with 24 basketball games packed into four days. The men’s and women’s tournaments consist of eight teams in each bracket, featuring top-caliber competitors from across the United States. Men’s and women’s games are alternated throughout the event.

As host, both the men’s and women’s teams from Grace will earn automatic bids to the NCCAA championships.

“This is an exciting moment for our athletic department, campus and community,” said Grace Director of Athletics Chad Briscoe. “We are humbled and thankful to once again be selected by the NCCAA for the opportunity to host both of these national championships. We will work diligently to continue creating a national championship atmosphere that generates great memories for the participants, fans and our community.”

“Grace College is honored and delighted to once again host these great championships,” said Grace College President Dr. Bill Katip. “We have thoroughly enjoyed hosting the NCCAA championships for over a decade, and we are excited at the opportunity to continue holding this prestigious event on our campus.”

“The CSPs truly define the NCCAA and its commitment to our student-athletes,” Wood said.  “Our goal is to remind each participant of his/her Christian responsibility prior to competing for a national championship. One men’s and one women’s team will leave with a banner as champions, but each team and individual will have the opportunity to carry the banner for Jesus Christ while in Winona Lake and throughout their life.”

The NCCAA, a not-for-profit association headquartered in Greenville, S.C., is America’s only Christian intercollegiate athletic association, serving colleges and universities across the United States and Canada. A total of 24 national championships in men’s and women’s sports and two national invitationals are sponsored by the NCCAA. The NCCAA also sponsors mission endeavors throughout the world sharing the witness of Jesus Christ through athletics.

For more information on the NCCAA, contact the national office at 864-250-1199 or visit thenccaa.org.

For further details about Grace’s hosting the NCCAA Division I Basketball Championships, visit gclancers.com/nccaa. – from gclancers.com