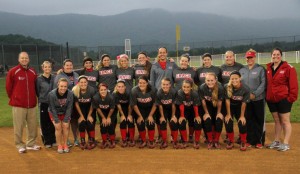 The Grace College Lady Lancers on the field Thursday morning.

The Grace College Women’s softball team is in Roanoke, Va., for the NCCAA World Softball National Championship at Botetourt Sports Complex in Troutville, Va., which is hosted by Bluefield College. Their first opponent in the double-elimination tournament was fifth-seeded Trinity Christian on Thursday afternoon. Here’s a report from the field.

The Lady Lancers (28-28) erupted offensively in a 12-3 victory over Trinity Christian to open up the 2014 NCCAA World Series on Thursday, held at Botetourt Sports Complex.

The Trolls (26-26) got on the scoreboard first in the second inning, plating three runs on three hits. Freshman Brittany Melzoni got Grace’s offense rolling to lead off the bottom of the second, blasting a solo home run to center field. Tiffany Featherston and Clarissa Knight also drove in runs in the inning as Grace evened the score 3-3.

Grace blew the game wide open in the bottom of the fourth with a nine-run explosion. Olivia Winget, Grace’s all-time leader in hits and home runs, added another career highlight with a two-run home run in the inning. Brooke Shell and Knight notched two hits apiece in the fourth, and Paige Petrone had a two-out, two-run double.

Freshman duo Knight and Melzoni batted 3-for-3 in the win, and Knight drove in three runs. Petrone and Featherston were 2-for-2 as both players had two RBIs. Shell was 2-for-4 with two runs scored, and Samantha Johnson scored twice as well.

Alex Shipley and Hannah Adams combined for the pitching win on the mound.

The Lady Lancers advance in the NCCAA World Series bracket on Friday in the national quarterfinals. Grace’s game against either Shorter or Cedarville is tentatively slated for 4 p.m., dependent on field conditions.