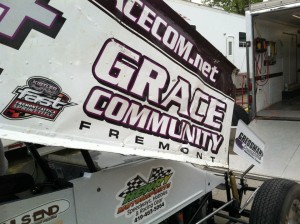 Brian Smith comes from a legacy of racers. His great-grandfather raced motorcycles back in the 40s and 50s, and his father in the late 70s. Smith himself has been racing since 1991. “I think it’s the path that God had planned for me,” he explained. “Even back before I became a Christian. I’ve loved racing since I was two years old.”

Smith races a 410 sprint car out of Fremont, Ohio (home of the Fremont Speedway), and is partially sponsored by Grace Community Church, a Grace Brethren congregation in Fremont. Operating a high-maintenance, high-power racecar on a shoestring budget, Smith has snagged seven wins during his years of competing. He and his wife, Kimberly, started attending Grace Community Church in 2000 after experiencing turmoil in their marriage. (That’s Brian and Kim in the photo at right.) 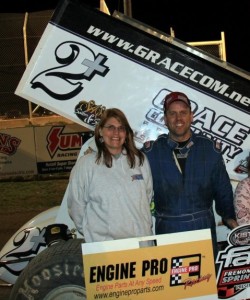 “Brian is a believer with sterling testimony for Christ both on and off the track,” says Kevin Pinkerton, lead pastor at Grace Community Church. “When he got saved, he developed a very good reputation and started attending our church. We had some advertising money set aside and we wanted to introduce more people to Christ. Sponsoring his car is just a conduit for that.”

Grace started sponsorship in 2011. “We were going for the biggest crowd of nonbelievers we could find,” Pinkerton explains. “Racing is very popular in Fremont and the crowd at the races is not generally church people. We’re a large church in a small town, so we have a significant presence in almost any crowd – but we targeted this one to try to make a greater impact.”