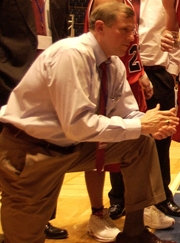 Grace College men’s basketball coach Jim Kessler picked up his 500th career win Tuesday night as the Lancers defeated Spring Arbor 70-67. Dave Richmond’s three-pointer with 47 seconds left broke a tie score as Grace improved to 12-4 on the season. Kessler has coached 28 years at Grace and holds a 500-407 career record. He has been named NAIA National Coach of the Year after leading the team to the 1991-92 NAIA National Championship and has twice been named NCCAA National Coach of the Year. The program has 11 seasons with at least 19 wins and three 30 win seasons.