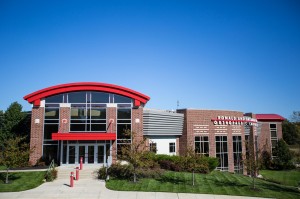 On Saturday, the Ronald and Barbara Manahan Orthopaedic Capital Center will be the site of the 2015 commencement ceremony at Grace College and Seminary.

As the 2014-2015 school year draws to a close, Grace College and Seminary will be holding a commencement ceremony on Saturday, May 9 at 9 a.m. at the Ronald and Barbara Manahan Orthopaedic Capital Center. The ceremony will include an invocation by Rev. Jeffrey A. Patton, lead pastor at the Grace Brethren Church in Norwalk, Calif.; an institutional welcome by William J. Katip, president at Grace College; and a benediction by John F. Carini, a physician in Lancaster, Pa. A brass ensemble, directed by Eric Criss, will be performing at the commencement services, as well as a the Lancer Chorus, directed by Thomas Hall.

This year, Grace asked the senior class to select a faculty member to appear as a special guest speaker during the commencement ceremonies. The students selected Roger Stichter, accounting and finance professor at Grace.

For the 2015 Commencement, Dr. Katip has chosen Dr. Paulette Sauders, the faculty member who has served Grace the longest, to carry the ceremonial mace. Carrying the mace is a great honor and is traditionally borne by someone who has been singled out for tribute.

During the ceremony, Grace will also be honoring Dr. Sauders for 50 years of service as a professor of English and journalism. Only three others have reached this esteemed milestone at Grace (Dr. Homer Kent, Jr.; Ron Henry; and R. Wayne Snider), but Sauders is the first faculty member to accomplish this while still actively teaching full-time. In addition to serving as a faculty member in the Languages, Literature, and Communication Department (where she’s taught 17 different courses), Sauders taught in the Grace prison program for 16 years and served as a leader for Women of Grace for 40 years. Sauders has been the chair of the department since 2003 and for four decades has served as an advisor to the school newspaper, “The Sounding Board.”