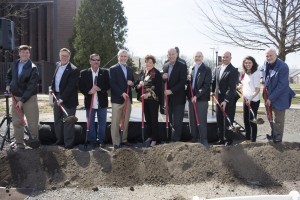 Grace College, Winona Lake, Ind., broke ground today (Friday, March 24) on the $8 million Dr. Dane A. Miller Science Complex on its Winona Lake campus. The complex is part of the Aspire Campaign for Grace College and Seminary, a $37 million campaign announced yesterday to empower the next generation to lead and serve well.

The Science Complex will renovate 22,500 square feet of existing space and create 13,000 square feet of new space for Grace’s growing science and math programs. The new complex will equip students with upgraded laboratories and modern classrooms; it will provide a contemporary hub for lakes and streams research and additional office and multi-purpose space.

For nearly 40 years, Grace College students in the Department of Science and Mathematics have studied in the Cooley Science Center to become physicians, researchers, mathematicians and medical professionals. In those four decades, the department has grown sixfold and now includes 13 different science majors and 11 pre-professional tracks. Simultaneous to growth in science programs, Grace has added environmental studies, exercise science and a nursing program in partnership with Bethel College. The Cooley Center has also housed the Lilly Center for Lakes and Streams since its founding in 2007.

“As we have advanced as an institution, the sciences have become a critical part of our mission to mold servant leaders,” said Dr. Bill Katip, president of Grace College and Seminary. “Our growth in health and environmental science and pre-medical fields has necessitated that we build modern classrooms and purchase updated equipment. The Dr. Dane A. Miller Science Complex will be a state-of-the-art facility, with the latest in labs and equipment, to train world-class biologists, chemists, engineers, and medical professionals at Grace College.”

The new science complex is named after the late Dr. Dane Miller, co-founder and 39-year president and CEO of Biomet. Dane was a Warsaw and Winona Lake resident for nearly 40 years. Dane and his wife, Mary Louise, have invested substantially in the local community, including at Grace College and Seminary.

“The Millers have generously given of their time, wisdom, and resources to Grace College over the course of our friendship,” said Katip. “We are delighted that Mary Louise allowed us to name this complex in memory of Dane,” he said.

“Dane would be elated about the new complex and deeply honored that Grace would recognize him in this way,” said Mary Louise Miller. “This is the greatest visible tribute to Dane’s legacy in our community,” she said.

At the conclusion of the groundbreaking ceremony, a bust of Dr. Dane Miller was unveiled. The bronze bust, donated to Grace by friends of Dane, will be displayed in the foyer of the new Science Complex.

Dr. Bill Katip announced that more than $7.1 million has been raised to date toward the $8 million goal for the Science Complex. This total includes a lead gift from Mrs. Mary Louise Miller, a significant contribution from Zimmer Biomet, and a $1 million grant from the K21 Health Foundation to fund new space and laboratories for the Lilly Center for Lakes and Streams.