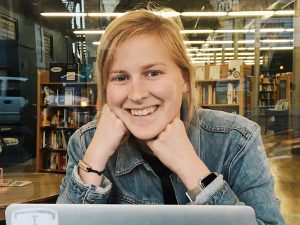 At age 23, Grace College alumna Karly Poyner received the prestigious Doctoral Studies Scholarship at the University of Memphis to pursue her Ph.D. in communication studies. The scholarship was added to Poyner’s assistantship tuition coverage and stipend, making her Ph.D. cost-free.  Poyner earned her bachelor’s degree in communication at Grace College in 2018 and her master’s in communication studies at Ball State University in May. While at Ball State, she received the BSU Graduate Student Recognition Award, was named the 3-Minute Thesis Runner-Up and scored a Top Student Paper in the Central States Communication Association.

According to her adviser and Grace College Associate Professor of Communication, Dr. Pat Loebs, Poyner demonstrated great potential from day one.

“Karly always brought her whole self to the classroom. She’s a critical thinker, an effective communicator, and a hard worker. When we started talking about graduate school as the next step for her, I had no doubts that she would thrive,” said Loebs.

Poyner, a Winona Lake, Ind., native, came to Grace after being enrolled in its Jump Start program in high school. While she began as a declared elementary education major, it was her Introduction to Public Speaking class that shed light on her love of communication.

“Grace College was where I found myself. I found a department that fit my area of academic curiosity, and I found friends who motivated me. I loved feeling seen by my professors and classmates and being challenged to think deeper and harder,” stated Poyner.

During Poyner’s senior year, she received a number of acceptance letters for master’s programs with full assistantships around the nation. After she committed to Ball State, Poyner remembers her last advising meeting in Loebs’ office when he said, “Don’t lose touch, Karly. Rely on us. We will always have your back.”

“And I’ve stayed in touch!” she exclaimed. “I still email and meet with Pat regularly. Pat and many of my peers at Grace have been curious about my research, my teaching, my classes and most of all, my spiritual journey through the hard, lonely and frustrating moments of grad school,” said Poyner.

While Poyner’s time at Ball State was a challenge, it was instrumental to her academic growth. She gained experience teaching undergraduate courses, and she presented research at numerous regional and national conferences including the National Communication Association. Perhaps most notably, Poyner successfully defended her thesis: “‘Jesus Made a Feminist Out of Me’: Communication of Dual Evangelical and Feminist Identities,” which is now a published work. This spring, Poyner’s second publication, “Coats of Fire: Rhetorical Identity Negotiations of Feminist Evangelical Christians,” will be printed in volume 19 of “Kaleidoscope: A Graduate Journal of Qualitative Communication Research.”

Even at state schools, Poyner has continued to integrate her faith and scholarship. “I remember telling my thesis adviser that working on my M.A. thesis brought me closer to God. I felt empowered, and I longed for my research to honor God’s creation,” she added.

When it came time to apply for Ph.D. programs, once again, Poyner was accepted into some of the nation’s top doctoral programs. After she received the Doctoral Studies Scholarship at Memphis, Poyner made her decision and began her first semester there this fall.

Looking forward, Poyner hopes to continue to write, research and teach in a way that promotes transformative education.

“Much of my teaching philosophy approaches the classroom as a space where students are free to struggle. I often think of my time at Grace, working with Dr. Loebs, Professor Yocum and Professor Benyousky and being asked to think critically of the messaging around us, the ethics of our communication and how relationships are formed through symbolic language.  I long to give back to students what was given to me: a classroom led by a professor who encouraged us to wrestle with our faith and communication,” she said.