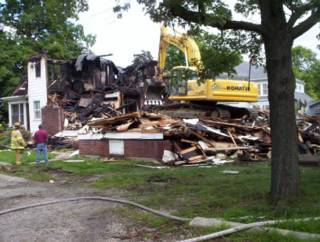 Grace College’s Gamma Hall men’s dorm, a perimeter dorm located on King’s Highway in Winona Lake, Indiana, was completely destroyed by fire Monday night. Tuesday morning workmen pushed in the rubble after nearly 40 firemen from Winona Lake and Warsaw fought the blaze for 50 minutes in the middle of the night. Lightning is suspected as the cause of the fire in the 80-year-old building, which was unoccupied. (demolition photos by Jesse Deloe)