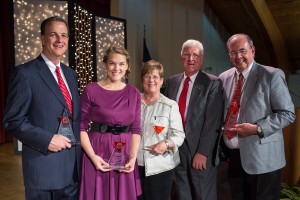 Grace College and Theological Seminary honored several graduates last night at last night’s Celebration of Grace banquet. Bill and Carole Gordon were recognized with the Honorary Alumni Award; Elizabeth Vastbinder was named the Young Alum of the Year; former BMH executive director Terry White received the Alumni Distinguished Service Award; and Grace Brethren pastor, Bob Fetterhoff, was named Alum of the Year. Below are the citations that were read.

Is given in recognition of alumni who have enhanced Grace College and Seminary’s mission, reputation, or campus morale, and represent the schools with professionalism, enthusiasm, and dedication.

Many of you may be surprised to learn that Bill and Carole Gordon are not in fact alumni, but their dedicated service to Grace has profoundly impacted campus. When they arrived on campus in 1978, it was with the goal of integrating the Word of God with every academic discipline. Bill joined the faculty that year as assistant professor of business. He served on the Academic Affairs Committee, the Athletic Committee, the International Business Committee, and the first Provost Council. Additionally, Bill was a charter member of the International Business Institute, representing Grace College with the institute across a number of European countries. Bill’s other involvements included the development of the Christian Business Faculty Association and serving as the Grace College Assistant Men’s Basketball Coach for three years. Perhaps one of his greatest accomplishments was the establishment of the Gordon Institute for Enterprise Development, which seeks to enable the Grace College community to form collaborative partnerships and opportunities with the local, national, and international business communities.

At every step, Carole has supported Bill and served the college community generously. She helped start and was the first chairman of the Faculty Women’s Club, coordinating campus activities for students. And Carole has hosted and mentored numerous students in her home. As it happens, she and Bill have taught more than a thousand students to water ski!

Bill retired in 2009, after 31 years as a faculty member at Grace; however, this amazing couple — that met in second grade — hasn’t slowed down a bit. Their commitment to Grace, its mission, and our students is as resolute as ever.

The Gordons are members of the Winona Lake, Ind., Grace Brethren Church (Bruce Barlow, lead pastor) and Bill serves on the board of directors of the Brethren Missionary Herald Company, the parent organization of GraceConnect.

Elizabeth Vastbinder is a 2009 Grace graduate with a bachelor’s in Social Studies Education. While a student, Betsey received the Outstanding Prospective Teacher Honorable Mention and the Social Studies Award. Currently, Betsey is a social studies and Spanish teacher at Lakeview Middle School with the Warsaw Community School district. In 2014, she was named Teacher of the Year for the prestigious school district, beating out 400 other candidates — many with decades more experience.

Her passion and enthusiasm for students and teaching is clearly evident to those around her. She is described as being a “kid-magnet” who makes learning fun, engaging, and inspiring. Besides being well-loved by students, she is respected and known for collaborating generously with her fellow staff and faculty. Betsey has a servant’s heart and is always willing to assist with translation for Spanish-speaking students and their families. Perhaps the greatest compliment of all comes from one of her former students who shared, “Mrs. Vastbinder had time for me. She believed in me when no one else did.”

Is given in recognition of alumni who have exhibited Christian leadership and who have displayed extraordinary service to the increased welfare of Grace College and Seminary.

Dr. Terry White is a member of the Golden Graduate Class of 1964. He graduated from Grace College with a bachelor’s in Music Education and lived and worked in Winona Lake, serving in town government, chairing the board of his local church, owning a number of local businesses, and holding multiple positions at Grace. In 1977, Terry left the area and spent 25 years working in Minneapolis and Washington, D.C. But thankfully Terry returned to Winona Lake in 2003 to revitalize and direct the Brethren Missionary Herald Co. and BMH Books. Upon his return, Terry enthusiastically and generously resumed his support of Grace, and over the past dozen years he has assisted with countless projects on campus. Currently he serves as a personal advisor to President Katip and assists with public relations activities, editing, and writing.

No one knows more about the history of Winona Lake as evidenced by his recent book, Winona at 100: Third Wave Rising, in which Terry traces the history of Winona Lake with co-author Steve Grill. Terry donates countless hours as director of the Winona History Center which fosters educational and scholarly interest in Winona’s heritage through the preservation and exhibition of historical collections. Additionally, he provides historical tours of Grace campus and Winona Lake to multiple Grace and community groups, which we hope many of you will be taking advantage of this weekend!

Terry is married to the former Sharon Auxt, who is also a golden grad from the Class of 1964. The Whites are members of the Winona Lake, Ind., Grace Brethren Church (Bruce Barlow, lead pastor) where Terry just finished a 10-year stint as a member of the board of oversees and moderator.

Alum of the Year:   Bob Fetterhoff

Is given in recognition of alumni who have enhanced Grace College and Seminary’s mission, reputation, or campus morale, and represent the schools with professionalism, enthusiasm, and dedication.

Bob Fetterhoff earned a master of divinity from Grace Theological Seminary in 1979 and a master’s in Christian School Administration in 1980 from the college. After graduating, Bob joined the staff of the Grace Brethren Church in Wooster, Ohio, and was named senior pastor not long after. This year, he announced he will be retiring from the role after 35 years of faithful service. In addition, he has been an active member in the Wayne County community as the founding pastor of Wooster Christian School and the founding chairman of the Pregnancy Care Center of Wayne County. Bob served as executive director of the Fellowship of Grace Brethren Churches for two terms and is currently chairman of GO2 Ministries. Bob hosts a weekly radio broadcast “Minute with the Master” and is also passionate about introducing people to a new perspective on reading and understanding the Bible through hosting tours of the Holy Land. Pastor Bob has hosted 21 tours since 1994 and has an upcoming trip scheduled for March 2016.

He and his wife, Roxanne, have two daughters and four grandchildren. A member of Bob’s congregation praised his leadership, remarking, “Pastor Bob had been a visionary, a shepherd, and an example to us all. I could not be more thankful for his extraordinary leadership.”