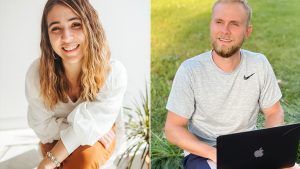 Two 2020 Grace College graduates, Dave Holden and Brittany Misencik, received recognition from the Illinois Press Association in their 2021 Best of Press Awards. Holden, a sportswriter and editor for The Advocate in Greenville, Ill., received second place in the non-daily division for “Sports Coverage.” Misencik, a general assignment reporter for the Morning Sentinel in Centralia, Ill., earned third place in the “Rookie of the Year” category.

“It’s impressive enough that Dave and Brittany graduated college and launched journalistic careers during the pandemic shutdown — let alone received statewide recognition during their first year on the job,” said Dr. Lauren Rich, chair of the Department of Humanities at Grace College. “We know that this is just the beginning of impactful careers for both of them,” she added.

Holden was an interdisciplinary studies major at Grace. His degree focused on communication, English literature, and media.

“One of my main goals after graduation was to keep writing,” said Holden. “I played sports growing up in Greenville and at Grace, so I enjoy focusing on athletics in the community. It’s been cool to shine a spotlight on the local athletes in this weird year,” he said.

Holden’s article, “Panther basketball bolsters their budget” landed him his Best of Press Award. The story covered the optimistic initiative of Greenville University’s Men’s Basketball Coach George Barber. Barber scheduled games with Division I teams to give his Division 3 team the opportunity to play in spite of Covid. The games generated income for the Greenville Panthers, allowing them to more than double their fundraising goals for the year.

“It’s more of a community award than anything I did,” said Holden. “It was just such an innovative way of fundraising and taking something negative and making it positive,” he said.

This fall, Holden is moving to Malibu, Calif., to study in Pepperdine University’s highly competitive MFA in Screen and Television Writing program. The school is ranked in the Top 50 film schools in the U.S.

“I was drawn to Pepperdine because they look at screenwriting from an angle of cultural impact. Finding a way to craft narratives that impact people is really important. I’m excited to study that at Pepperdine,” said Holden.

After the program, Holden hopes to work in the film industry or teach reading and writing.

Misencik, of Sagamore Hills, Ohio, majored in secondary English education and minored in journalism at Grace. After applying for multiple teaching positions, the pandemic shifted Misencik’s career plans; she decided her shot at journalism was “now or never.” “I hoped that someone would take a chance on me, fresh out of college with a teaching degree,” said Misencik.

David Penticuff, editor at Morning Sentinel, was that someone.

“Brittany is very talented and very enthusiastic about putting herself to work for people in our community. In many ways, Brittany is an old-fashioned reporter who is concerned about telling stories that can change the community. She does the things that are historically the best parts of journalism; she’s fair, she’s accurate, and she works hard. She’s an editor’s dream,” said Penticuff.

Misencik’s background in education came in handy. She was assigned several stories about the challenges of education through the pandemic. A number of those stories contributed to her winning “Editorial Rookie of the Year,” for which Penticuff nominated her.

“It was incredibly special for me to see the growth in my writing and the support and from David, who spent a lot of extra hours for line-by-line edits with me in the first few months I started,” said Misencik. “He pushes me each day to write pieces that bring light to issues in the community, even if they ruffle feathers,” she said.

Looking ahead, Misencik still hopes to teach language arts one day. But now, her hopes include adding some journalism courses to the mix.