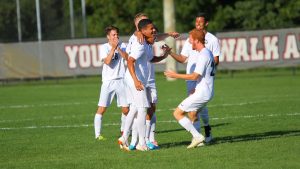 The Lancers shut out Ecclesia 4-0 on Tuesday night to start pool play. Four different players scored for the Lancers (10-6-3) in a balanced effort.

The win sets up a crucial matchup on Wednesday night against Ottawa-Arizona (6 p.m.). If Grace wins or ties the game, the Lancers will win the pool and advance to the national semifinals.

Grace could still advance with a loss to Ottawa on Wednesday night, but the Lancers would need help from teams in the other two pools.

The Lancers outshot Ecclesia 23-5 in a dominant performance. But despite that lopsided advantage, the game was still scoreless for the entire first half.

Grace shot 11 times in the first half but failed to score. The Lancers did find the back of the net once, but it was nullified by an offside call.

With 15 minutes left in the half, Ulisses Miranda found space on the left side of the penalty box, but his shot bounced off the post.

Although the score was 0-0 at halftime, the Lancers still had plenty of goals to come.

Twenty-eight seconds into the second half, Grace netted its first. Cody Boerema crossed into the box, and Miranda finished it off with the game’s first goal.

Just over 10 minutes later, the lead had doubled. Henrique Cerruti picked out Felipe Gruber with a pass on the left side of the field. Gruber took care of the rest, slicing his shot to the far post for a 2-0 lead.

In the 66th minute, Boerema added his second assist. The senior sent in a corner kick, and Ze Maria Goncalves connected for the goal at the 65:30 mark.

The final goal came with less than two minutes to play. Omar Gonzalez passed a quick free kick to the box, and Cedric Brenneman headed it into the air. Ecclesia’s goalkeeper failed to grab the ball, and Tyler Brueckman alertly shot into the empty net.

Boerema and Gabriel Dos Santos also hit goalposts during the second half for the Lancers.

Colton Wottring made four saves in a 90-minute shutout as Grace’s goalkeeper.

Miranda shot five times, as many shots as Ecclesia managed. Goncalves shot four times, and Brueckman and Gonzalez each had three shots. – from gclancers.com