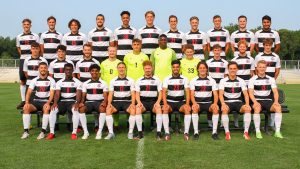 Grace progressed to earn an at-large spot in the NAIA National Championships during the spring, marking the squad’s third trip to NAIA Nationals.

This fall, head coach Arron Patrick has Grace’s sights set on a longer stay at NAIAs.

“Our new standard now as a program is to make the NAIA tournament every year. We want to win the conference and make NAIAs as a nationally ranked team,” Patrick said. “Our guys are much more confident now after last year. They have learned how to win big games, and we want to take a huge jump again this year.”

Patrick enjoys a challenge, and that competitive nature guides how he schedules opponents each year. During the 2020-21 season, Grace had the No. 2 most difficult schedule in the NAIA, according to opponents’ winning percentage.

This season will be no different. In the first month of the season, Grace will play four ranked opponents, including No. 1 Missouri Valley, No. 4 Columbia, No. 7 St. Thomas and No. 17 MidAmerica Nazarene.

“I want to be the best coach that I can be, and our team wants to be the best version of itself as well. You need a barometer like these quality opponents to test yourself,” Patrick explained. “If you’re going to go deep in a national tournament, you have to play against the best teams. Some teams don’t challenge themselves and aren’t ready for the NAIA test when it comes.”

Patrick said part of the strategy behind playing elite teams was to raise the profile of the Crossroads League. The league earned three bids to NAIAs last year.

Replacing Miranda won’t be as simple as picking a replacement. Miranda racked up 35 goals over his career (good for 10th all-time at Grace), including 16 goals and six assists in his senior campaign.

Patrick maintained that the Lancers will likely score more by committee this year. “Our forwards are all very different. There is a lot more balance this year, which could be good for our offense. We have 4-5 guys who could score 10 goals this year, which is hard to defend,” he added.

Ze Marie Goncalves is Grace’s most dangerous returner. The junior from Portugal had four goals and eight assists.

Grace has a crowded assortment of midfield options as well, giving Patrick a number of unique combinations to unlock each game. TJ White, Jordan Jayapuram, Mitchel Strawser and Felipe Gruber are all upperclassmen with national tournament experience. Jules Peycelon was also a consistent starter in his first season, and Cedric Brenneman, Famade Bamba, Blake Burns, Tyler Brueckman and Marco Poliani are poised to see playing time in the midfield or up front.

On the wings, Jonny Mora and Frederik Christmann are two of the best crossers on the squad. Daniel Santos Rosa has impressed in preseason as well, according to Patrick.

Defensively, Grace will have one of the more stable positional groups on the pitch. David Koch, Korry Hamlin and Flavio Cruz have played multiple years together in the backfield and will likely lead the unit.

Grace’s depth falls in line with Patrick’s philosophy to build a team who is “valuable and important” from top to bottom. “This team is far ahead of last year’s preseason squad, and we are committed to trust and be confident in each other and the Lord.”

The Lancers have a pair of home games this week to begin the season, including Tuesday (7 p.m.) against Trinity International and Saturday (2 p.m.) against Lawrence Tech. – from gclancers.com