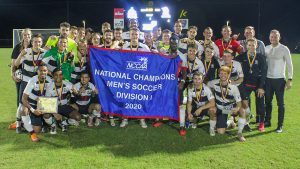 Felipe Gruber was the hero, scoring two first-half goals to give Grace a lead it would never relinquish.

The Lancers outclassed the Pilots (11-2-1) from start to finish. Grace’s possession wore down and eventually broke Bethel’s efforts, resulting in an emphatic 4-0 shutout in the national championship.

Saturday’s win caps off a whirlwind postseason journey for the Lancers (9-4-2). Grace played seven postseason matches since Nov. 7 (15-day span), including the Crossroads League Tournament. The Lancers won six of those seven games and only lost the CL championship in double overtime.

Goncalves had five assists in Grace’s NCCAA run, including the game-winning assist in the Lancers’ 1-0 semifinal win.

Grace began the game by building its possession. The Lancers moved the ball well against the Pilots and took the only shot attempt of the first 10 minutes.

Bethel did not register a shot until the 13th minute of play.

The Lancers broke through minutes later. Miranda led a quick attack, somehow pirouetting around multiple defenders and found Gruber in space in the penalty box. Gruber took care of the rest, slicing his shot above the goalkeeper for a 1-0 lead.

With 13 minutes left in the half, Jules Peycelon tried a deep shot that was saved with a desperate stab by the goalkeeper.

On the ensuing corner kick, Grace went ahead by two. A cross went to Gruber, who kept the ball under pressure and blasted his shot above the goalkeeper to stun the Pilots.

The Lancers went into halftime ahead 2-0, holding the majority of possession and threatening chances.

With 28 minutes remaining, the lead ballooned to 3-0. Tyler Brueckman and Blake Burns combined to advance the ball into Bethel’s end of the field.

The play ended up with Cedric Brenneman, who took aim from distance. Brenneman’s shot snuck past the goalie and rolled into the back of the net, which seemed to visibly dampen Bethel’s spirits.

The fourth and final goal was a hustle play from Miranda. The senior put himself in position for a loose ball in the penalty box, calmly collecting the ball and passing it into an empty net.

The Lancers limited the Pilots over the final minutes, keeping Bethel off the scoreboard. The team sprinted onto the field in celebration as the clock expired, officially dubbing Grace as NCCAA national champions.

Grace’s fall season wraps up on a high note, but the Lancers will continue play in the spring with the schedule to be announced. – from gclancers.com