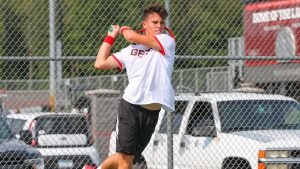 Coming off a NCCCA National Championship, a Sweet 16 finish in the NAIA, and a school record for wins in a season, the Lancer men’s tennis team has a tall order in front of them if they want to show improvement in 2021-22. However, with six of their top seven players returning—including three All-Crossroads League honorees—Coach Andy Lewis and the Lancers appear to have the ingredients of another stellar campaign.

“If we continue to compete as a team and play for each other, I believe we can be even better this year,” said Lewis.

Coach Lewis has 11 familiar faces on his 13-man roster this season, led by an experienced upperclassmen group of five seniors and four juniors. Topping this list is senior Max Rozas, who was named an All-American by both the NAIA and NCCAA. The No. 1 player for the past three years for the Lancers, Rozas has won 43 singles and 40 doubles matches in his career. Fellow senior Fabricio Galvan also returns after being part of the No. 1 doubles team and playing in the No. 4 singles position. Galvan joined Rozas on the All-Crossroads League squad.

Other seniors include Nicolas Graber, Jacob Gray and Milan Savic. The three combined to post perfect records last season, going 13-0 in doubles and 5-0 in singles play.

The junior class includes David Sandi, who played at No. 3 singles a year ago and also earned All-Crossroads League honors, along with Ramiro Candia, who filled the No. 5 singles spot. They are joined by third-year players Kye Barrett and Francisco Margaria.

A pair of returning sophomores each made an impact in their rookie season at Grace. Facundo Parades worked his way up to the No. 2 singles position by the end of the season, posting an impressive 10-3 record. Ivan Antinori also broke into the rotation late in the year, going 7-0 in the No. 6 singles spot and adding a 16-5 doubles record.

“I believe doubles play is an area of focus for us,” said Lewis. “We moved people around several times last year, trying to find the right mix. We need to find some good combinations early in the year and then continue to improve as things move forward.”

The Lancers will welcome two new athletes to the team, both as sophomore transfers. Nicolas Medina arrives from NCAA Div. I Duquesne University and should find his way into the top six singles lineup. Javier Gallego transfers from Crossroads League rival Goshen College and will have to sit out a year before putting on a Grace uniform. He was an All-Crossroads League selection during his first season at Goshen.
“We have great depth and experience, which makes practice very competitive and helps everyone continue to improve,” stated Lewis. “After facing many of the best teams in the NAIA, I don’t think we’ll be intimidated by anyone.”