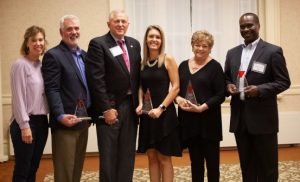 Grace College recognized six distinguished alumni and friends at its annual Homecoming Chapel on Oct. 4.  Jim Kessler, Mary Louise Miller, LeAnne Lavender, Lamarr Lark, and Dan and Debi Renner were honored for their accomplishments and contributions to Grace and to their communities. Each of the men and women awarded have advanced the mission of Grace College & Seminary through their lives and careers.

Kessler, or “Coach K,” graduated from Grace in 1970. He started his coaching career at Grace College in 1977 and never left. After five decades of coaching, he made the decision to finish his career in December 2018.

Kessler’s coaching career at Grace is a testament to his commitment to be faithful in the journey. Bill Gordon, faculty emeritus, spoke highly of Kessler; “Jim has been a great example in my life and in thousands of others. He wasn’t just a coach, he was a teacher. Kessler taught others how to live out Grace’s mission statement — in strengthening character, sharpening competence, and preparing for service.”

Under Kessler’s leadership, the men’s basketball team made appearances in a national tournament for 11 consecutive seasons and overall, made nine appearances in the NAIA Nationals, including the 1987 Sweet 16 finish and 1992 team, which won the NAIA Division II National Championship–the lone NAIA title in school history.

Mary Louise Miller and her late husband Dr. Dane Miller are legends in the Winona Lake and Warsaw community, the state of Indiana, and across the globe. The worldwide orthopaedic company, Biomet (now Zimmer Biomet), was founded in the Millers’ converted barn in 1977. Under Dane’s leadership, the company grew from eight people to more than 10,000 globally with annual sales exceeding $2.7 billion. But the company’s heartbeat was always to better peoples’ lives and to invest in communities.

Thirty-five years ago, the Millers created the Dr. Dane and Mary Louise Miller Foundation to support leadership in philanthropy, public service and the advancement of the sciences. The foundation has supported numerous nonprofits and thousands of families; one of the chief benefactors is Grace College. Dane was intimately involved in the development of the Manahan Orthopaedic Capital Center and most recently, the Dr. Dane A. Miller Science Complex, which stands as a tribute to Dane’s vision and life of generosity.

Since Dane’s death in 2015, Mary Louise has continued to support their passions. Mary Louise served as the honorary chair of the Grace College & Seminary ASPIRE Campaign and continues to use her foundation and leadership to advance the school’s endeavors. “Grace is a college devoted to making God-led decisions; that’s worth supporting,” said Miller.

After graduating from Grace in 1987, Lark spent the majority of his career at Abbott, a leading global healthcare company, where he retired as vice president of human resources at the age of 50. While at Abbott, Lark pursued any opportunity he had to pastor, serving as an assistant pastor and executive pastor at various churches as he and his family moved around the country for his job.

In 2014, Lark planted a church in Libertyville, Ill., called Connection Church, a culturally, generationally, economically diverse church. Lark bought and converted an old barn built in the late 1800s into Connection’s worship center, and now he can be found preaching on Sundays to around 75 people. In addition to pastoring full time, Lark is an owner/operator of a Chick-fil-A in Gurnee, Ill. Lark explained, “Chick-fil-A gives me the financial freedom to invest in Connection Church.”

Lark has invested tremendously in Grace College as well. Lark has served on the Board of Trustees for 14 years. His lengthy experience in human resources has benefited Grace greatly, and he was instrumental in the design of Deploy, Grace’s competency-based seminary program, and in connecting Grace with other key pastors in the Midwest.

After earning her bachelor’s degree in 2010, Lavender began her career as an admission counselor at Grace where she achieved record-breaking numbers in both her territory and for the institution. She went on to become the director of admission at Grace College Indianapolis. Concurrently, she earned her MBA from Grace in 2015.

In 2016, her husband, Derek, was in a serious motorcycle accident that left him paralyzed from the chest down. Lavender resigned from Grace to help him recover and figure out a new way forward. As a result, she founded Lavender Accessible Design where she helps others design and create accessible spaces for their home or business. Additionally, she’s become an advocate of the spinal cord community through her social media presence, Lavenders Longshot.

In 2017, MudLOVE asked her to come on as a director to help with its fundraising efforts. Now a co-owner of LoveWell Fundraising, she has raised hundreds of thousands of dollars for organizations and people who need encouragement in their lives.  The same year, she became a content strategist at Water for Good, where she helps raise awareness about ongoing water poverty in the Central African Republic.

Dan and Debi are the proud parents of Sarah and Daniel, Grace College graduates of 2016 and 2019. “We couldn’t be more thankful for the way Grace invested in our kids, striking the perfect balance of giving them both the structure and the freedom to grow in their faith,” said Debi. Dan and Debi wanted their two children to benefit from a college experience that sharpened them spiritually while giving them the tools they needed for a future career.

Dan is an active member of five years on Grace’s Board of Trustees and is currently the vice chair.  Dan and Debi both have spent countless hours on various committees at Grace, have been integral in developing Grace’s new brand platform, and have consulted on enrollment and financial aid interests. The Renners have also contributed significantly with their resources.

Dan was part of the founding team at CoverMyMeds (Ohio), a healthcare software startup established in 2008. Blessed with wise leadership, a  talented team and an industry model that found unusual traction, the business grew at a rapid pace. CoverMyMeds was sold in 2017, and the Renners now enjoy the freedom to invest in many people and organizations, including Grace. The Renners support scholarship funds and the launch of Deploy, Grace’s competency-based seminary program.